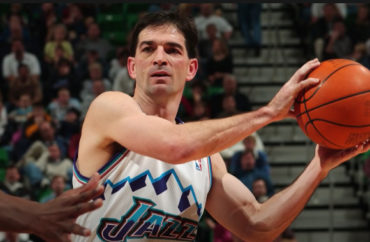 It appears John Stockton is going to need an assist if he wants to get his Gonzaga season tickets back.

The school’s most famous graduate and NBA career assists leader has been barred from his alma mater’s games because he has refused to adhere to Gonzaga’s mask mandate.

Stockton told the Spokane Spokesman-Review the school had received complaints that someone with such a high profile refused to comply with the mask mandate.

“Basically, it came down to, they were asking me to wear a mask to the games and being a public figure, someone a little bit more visible, I stuck out in the crowd a little bit,” Stockton said. “And therefore they received complaints and felt like from whatever the higher-ups – those weren’t discussed, but from whatever it was higher up – they were going to have to either ask me to wear a mask or they were going to suspend my tickets.”

Later, Stockton said, the school suspended his tickets. He said his conversations with the school were “congenial” but also “not pleasant.”

A spokesperson for Gonzaga University provided a statement to the New York Times that simply said, “Attendees at basketball games are required to wear face masks at all times.”

Attendees at Gonzaga home games who are 12 years old or older are required to show either proof of vaccination or a negative COVID test within the past 72 hours. Attendees must also wear a mask, pursuant to the school’s indoor mask mandate implemented last August.

This isn’t Stockton’s first foray into the world of COVID politics. In June 2021, he appeared in a documentary called “COVID and the Vaccine: Truth, Lies and Misconceptions Revealed,” in which he claimed 100 professional athletes have died from taking the COVID vaccine.

“I think certainly it stresses (the relationship with Gonzaga),” Stockton told the Spokesman-Review. “I’m pretty connected to the school…I’ve been part of this campus since I was probably 5 or 6 years old. I was just born a couple blocks away and sneaking into the gym and selling programs to get into games since I was a small boy. So, it’s strained but not broken, and I’m sure we’ll get through it, but it’s not without some conflict.”

When asked if he’d contemplated wearing a mask to keep his season tickets, Stockton responded, “Of course. You consider everything, every option when you’re presented with something like that, and I considered it in great detail.”