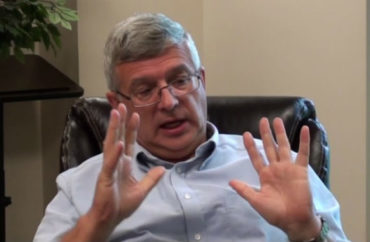 A highly educated scientist who dissents from the mainstream scientific community on the age of the earth has won his battle against the government for access to Grand Canyon National Park.

Andrew Snelling has a doctorate in geology from the University of Sydney and 45 years of geological field and lab experience, but the National Park Service allegedly kept him from doing research because of his religious views.

“They came to realize my research proposal was acceptable and in line with scientific practice and wanted me to clarify some details,” Snelling told The College Fix in a phone interview.

Snelling is a self-proclaimed creationist who works for Answers in Genesis, a Christian apologetics group that investigates geological phenomena from a literal biblical perspective.

The group claims the earth is 6,000 years old, citing biblical genealogies, rather than the mainstream scientific view of billions of years old. “As a creationist I believe the biblical record is an eyewitness account given to us by God, and we can test it,” Snelling told The Fix.

He’s also the editor of the organization’s research journal, and the Grand Canyon – where he has led river-rafting tours – is his specialty. Snelling believes the vast expanse is evidence of the biblical flood of Noah.

He claimed in his May 9 suit that NPS violated Snelling’s First and Fifth Amendment rights to free exercise of religion and due process in its treatment of his research request.

The geologist’s saga started in November 2013, when he sought a permit to investigate four specific Paleozoic folds in the Grand Canyon to see when the folding actually occurred. The NPS asked Snelling to submit two additional peer reviews, which he said had not been requested on his previous three trips to the Grand Canyon.

All three reviews were critical of Snelling’s scientific claims, and the following March, NPS denied Snelling a permit, telling him he could find those type of sediments outside of the Grand Canyon.

“I was astounded they never looked at the science of the question he was asking, but simply looked at the fact he was a Christian and a creationist,” Gary McCaleb, Snelling’s lawyer at the Alliance Defending Freedom, told The Fix in a phone interview.

“All three of their external reviewers were negative about me personally because of my religious beliefs,” and Snelling believes that was the reason for his denied permit, he told The Fix.

New Mexico’s Karlstrom told The Fix in a phone interview that Snelling’s proposal was not to do science, but to reinforce his religious beliefs.

“It was my recommendation that the park decline his science permit based on the fact it wasn’t valid science,” he said.

Snelling’s “intent” and lack of a past science track record on Grand Canyon geology, or structural geology of monocline formation in general, may also have been part of the reason for the rejection of his proposal, Karlstrom said in an email.

Despite telling Snelling that his materials could be found elsewhere, NPS didn’t tell him where to find them and didn’t respond to his queries, according to the suit. He said he was warned he would be banned from the park if he tried to pick up samples without a permit.

Snelling submitted another research proposal that dealt with some of the scientific concerns raised by the prior peer reviews. He worked for almost three years informally answering questions NPS had about his research, McCaleb told The Fix.

In July 2016, Snelling was issued a permit for taking pictures, finding specific GPS coordinates and explaining how the samples would be extracted from public view.

“It was an impossible situation because there was no guarantee that even if I did it that they would grant the collecting permit,” Snelling told The Fix.

"One cannot look at identical sediment layers across 100's of 1000's of sq miles and not see the result of A Great Flood." Dr.AndrewSnelling pic.twitter.com/1r0xaXlHwY

This is a “routine (not out of line)” procedure for the NPS science office, “to request specific GPS coordinates for proposed sampling,” Karlstrom said in an email. He and his colleagues “go through this each year for sampling we do in remote areas.”

Convinced NPS was skirting the law with the requirements it was imposing on his requests, Snelling contacted NPS this past December and January, receiving no response. He enlisted Arizona Rep. Trent Franks to contact NPS, but the agency ignored the congressman as well. The Fix reached Franks’ office but a spokesperson has not yet called back to answer questions.

“I can smell bureaucratic stonewalling from 100 miles away and that was exactly what was going on,” McCaleb told The Fix.

An NPS spokesperson told The Fix that an applicant’s beliefs are “not part of or a consideration” when evaluating permit applications. Snelling had been previously denied a permit “because the rock layers he wanted to study were not exclusive to the park,” but after a revised application and “extensive back-and-forth,” he got permission to study layers specific to the park.

The park service welcomes applications “from a broad array of academic institutions and encompassing research questions of all kinds,” because they can “provide critical information to guide park management,” the spokesman said.

This was not the first time the Grand Canyon has dealt with a creationist controversy, Snelling and McCaleb each said. In 2004, the park’s bookstore pulled a book written from a creationist perspective, Grand Canyon: A Different View by Tom Vail, after backlash from the geology research community.

Snelling admits that “most in academia don’t agree with me” when it comes to geological beliefs.

Karlstrom is of two minds when it comes to Snelling’s request. “It’s innocent in a way, and we should give them a permit,” he said in the phone interview:

And in another way, it’s completely diabolical – this well-funded group of people that is trying to remove credibility of science so that we can make decisions based on people’s religion. It’s sweeping our country, and it’s very frightening for scientists.

UPDATE: The National Park Service responded to Fix questions after this article was published. Its answers have been incorporated.

MORE: Real scientists ‘pursue truth whether it is politically correct or incorrect’