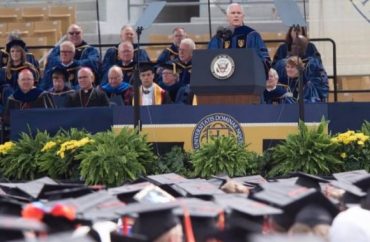 Roughly 100 students walked out of the Notre Dame commencement ceremony on Sunday as Vice President Mike Pence delivered his speech to the class of 2017.

The 100 students at the Catholic university turned their backs on the vice president and quietly paraded out of the ceremony as Pence took the podium. He kept his poise and professionalism throughout the disturbance and did not acknowledge the walk out.

But others did. A strong cacophony of booing echoed out as the grads left, a video of the walkout shows. Indeed, the 100 grads represent a small percentage of the more than 3,100 students graduating Notre Dame.

As the demonstrators stormed out, some whistled and clapped, too.

The protest, planned weeks in advance, was staged by a group called “We StaND For,” who claim Pence’s policies target the LGBT community, immigrants and refugees.

Participants called it a success.

“If it was just five of us, we would have thought we were successful because we were doing the right thing,” Luis Miranda, 29, a protester who graduated from a master’s program at Notre Dame, told the New York Times. “The fact that so many people showed up was mind-blowing.”

Reaction was mixed, with some praising the demonstrators as a brave resistance, and others calling them spoiled brats.

“So sad to see all those heavily-in-debt over-privileged white liberal children walk out of their commencement at #NotreDame,” stated Washington D.C. pundit Peter Roff on Facebook.

Deion Kathawa, a free speech advocate who recently graduated from the University of Michigan, weighed in on Facebook that “I am deeply concerned by my peers’ inability to countenance the idea (which they could have done by sitting through their own graduation ceremony) that someone who thinks differently than they do is *not* a moral monster. They need to learn that lesson quickly; the world will not be kind to them otherwise.”

Nataline Duffy, in attendance with her husband Thomas from New Jersey to watch their son graduate, told USA Today the walkout was in “poor taste.”

“We think it’s disrespectful,” she added. “It’s so unnecessary. This is a good man who is coming here for graduation. I think better of Notre Dame students that they’d do this kind of thing. But it’s a very small group. I don’t think they represent Notre Dame at all.”

Pence, for his part, kept it classy.

“For this son of Indiana, I was proud to address the University of Notre Dame’s Class of 2017,” he posted on Facebook after his speech. “To the over 3,100 men and women who graduated: strive every day to lead for good with courage and conviction. Be leaders for the freedom of thought and expression. Carry the example and principles you’ve learned at Notre Dame to all the places where you will live and work.”