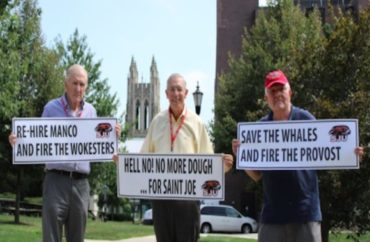 A group of St. Joseph’s University alumni are withholding donations to the school due to its “move toward the far left.”

According to The Philadelphia Inquirer, a main sticking point with the group was the canning of Professor Greg Manco back in May.

Technically, St. Joe’s refused to renew Manco’s contract — despite clearing him of any wrongdoing after a three-month investigation into tweets he made criticizing slavery reparations and bias trainings.

One of the alumni group, James Henwood, said St. Joe’s not bringing Manco back “looks like retribution” and added “it looks like they are sending a message to the rest of the staff and students that if you go against the orthodoxy, you’ll be punished.”

The alumni, six members of the classes ranging from 1968 to 1973, first contacted the university about the Manco situation in March. They recently delivered a letter to St. Joe’s officials at an alumni luncheon which blasted “the creeping illness that seems to be taking over the college where we learned important Jesuit values of being men for others.”

Henwood said the group’s withheld donations total in the six-figure range. The 1971 graduate and former cop noted he personally removed St. Joe’s from his estate plan. “I think it’s taken a leftist turn,” Henwood said of the university. “[It] used to be someplace special. Now, it’s fallen in line with the rest of higher education.”

A week ago Friday, Henwood protested at his class’s 50th reunion luncheon. He and several others refused to be inducted into St. Joe’s Golden Hawk Society and said they’ll continue to refuse further donations. “I’m coming to this very late in life,” Henwood said, noting he never protested anything as an undergrad.

Out of its 73,000 living alumni, St. Joe’s has been contacted by a handful about the Manco matter, said university spokesperson Gail Benner.

St. Joe’s said the non-renewal of Manco’s contract was not related to the investigation over the social media posts, but based on departmental needs for visiting professors. The school received more than a dozen reports of alleged bias or discriminatory conduct in the classroom from current and former students, she said. Some of the reports had to do with the social media posts, but not all of them, she said. …

She noted St. Joe’s hosts speakers with a variety of political view points.

“As an institution of higher education, St. Joseph’s will continue to prioritize fostering a safe learning environment and the exchange of ideas is integral to this effort,” she said.