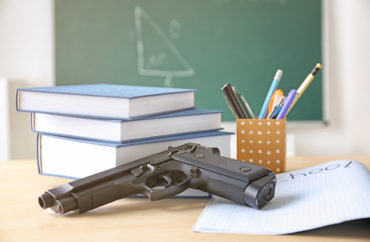 Activists with pro-gun groups are applauding a federal appeals court’s recent dismissal of a lawsuit challenging a Texas campus carry law. The ruling dealt a blow to the three professors who sought to nullify the law on First Amendment grounds.

This is the second time the professors have lost the case in court. The suit was thrown out, and the concealed carry law upheld, by a federal district judge in July of 2017. Now the U.S. Court of Appeals for the Fifth Circuit has upheld that decision, Inside Higher Ed reported, with the court stating that “none of the cited evidence alleges a certainty that a license-holder will illegally brandish a firearm in a classroom.”

Michael Newbern, spokesman for the campus carry group Students for Concealed Carry, provided The College Fix with a statement from Quinn Cox, the southwest regional director of the organization

“I am pleased to see this two-year-old law upheld. Once again, opponents of campus carry have failed to provide evidence that campus carry makes college campuses less safe or inhibits the free exchange of ideas,” said Cox.

“In Texas, vetted, licensed adults have been allowed to take their concealed firearms into places like movie theaters, churches, and public libraries for more than 20 years. It is silly to think that expanding this law to include the buildings of public colleges would somehow violate the U.S. Constitution,” Cox added.

“Last summer I sat through most of the federal court hearing, so I followed this closely. I heard the judge say to the plaintiffs that before they got too wrapped up in their witnesses to understand that he was going to rule against them and that they of course would appeal,” Tripp told The Fix via email.

“Nothing is ever a sure thing, but we believe that the appeals court made exactly the correct ruling,” Tripp said, stating that she regularly carries concealed handguns in the Texas state capitol.

“Nothing ‘controversial’ ever happens there and no one has raised the First Amendment issue,” she said.

That same website declares that “UT staff and faculty members do not have authority to ban handguns from classrooms.”

Shortly before the law took effect, three University of Texas instructors challenged the law in court. Professors Jennifer Glass, Lisa Moore and Mia Carter claimed that allowing students to carry firearms on campus would have a “chilling effect” on classroom free speech, thus violating their speech rights under the First Amendment to the United States Constitution.

“[R]obust academic debate in the classroom inevitably will be dampened to some degree by the fear that it could expose other students or themselves to gun violence,” the lawsuit stated.

The appeals court rejected that argument, noting that the plaintiffs “cannot manufacture standing merely by inflicting harm on themselves based on their fears of hypothetical future harm that is not certainly impending.”

Though the lawsuit hinged on a somewhat novel interpretation of free speech rights, pro-First Amendment groups were silent on the decision.

The Foundation for Individual Rights in Education, a campus watchdog group that monitors free speech violations on campuses across the country, declined to comment on the case. The First Amendment Center in Washington, D.C. did not respond to requests for comment.

The American Civil Liberties Union declined to comment on the matter. Imelda Mejia, a spokeswoman for ACLU’s Texas branch, told The Fix via email: “Unfortunately, we aren’t involved in the case and don’t usually speak on anything at the federal level.”

Mejia directed The Fix to the ACLU’s national headquarters, where ACLU spokesman Thomas Dresslar told The Fix via email: “Unfortunately, I’ve been informed that we do not have anyone that is able to speak to you about this.”

“However, particular federal or state laws on licensing, registration, prohibition, or other regulation of the manufacture, shipment, sale, purchase or possession of guns may raise civil liberties questions,” the page states.