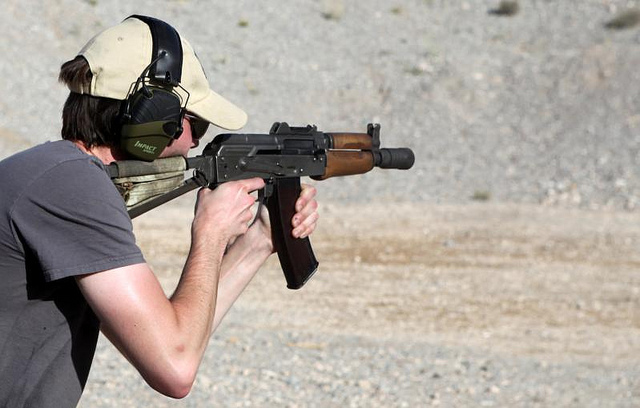 Two St. Louis legislators, one Republican and the other a Democrat, are behaving badly as a Second Amendment showdown in the show-me state gets absurd.

Rep. Mike Leara (R-St. Louis) has recently crafted a surprisingly terse bill that makes it a class D felony for a member of the Missouri General Assembly to propose a piece of legislation that abrogates or curtails residents’ Second Amendment rights.

Simply put, Leara’s bill posits – in its entirety – that “any member of the general assembly who proposes a piece of legislation that further restricts the right of an individual to bear arms, as set forth under the second amendment of the Constitution of the United States, shall be guilty of a class D felony.”

The bill is tiny, but it certainly sends a big message: the line has been drawn; it shall not be crossed.

Leara’s legislative proposal is quite unprecedented in that it punishes any legislator with a 5- to 10-year prison sentence for merely proposing gun control legislation. This is a very inventive, audacious, parliamentary suggestion; it ostensibly threatens state legislators with imprisonment if they push legislation unbecoming.

If passed, which is unlikely, it will certainly leave a bad taste in the mouth for those hoping to push future legislative attempts to address gun violence.

The representative’s impressive chutzpah aside, his bill is an overreach.

Not to be outdone, however, Rep. Rory Ellinger (D-St. Louis) recently concocted an anti-gun bill (or, for those who dabble in verbal prestidigitation, a pro-gun safety bill). If approved, it would, in effect, make it a class C felony – which, depending on state law, carries with it a 10- to 25-year prison sentence and a $250,000 fine – for Missourians who knowingly manufacture, import, possess, purchase, sell, or otherwise transfer assault rifles.

Ellinger’s proposal is likely to go nowhere in Missouri’s Republican-dominated 97th General Assembly, as it broadly interprets “assault weapons” to mean any semi-automatic shotgun, rifle or pistol that has the capacity to accept a detachable 10 round magazine. All such mechanisms would be, heretofore, banned and, along with the ban, anyone owning such weapons would be tried by the state as a felon.

Along with Ellinger’s sweeping, cleaver-like definition of “assault weapons,” which brands anyone who owns, manufactures and sells a pistol a felon—including geriatric grannies who simply want to protect themselves from gun-wielding rapists or killers—there is also the exception that he carves out for law enforcement, army personal, oh – and politicians such as himself.

The bill states “this prohibition shall not apply to any government officer, agent, or employee, member of the armed forces of the United States, or peace officer, to the extent that such a person is otherwise authorized to acquire or possess an assault weapon . . . and does so while acting within the scope of his or her duties.”

So while the manufacturer of “assault weapons” cannot sell semi-automatic weapons to those rabble-rousing, murderous grannies (I assume that the bill allows manufacturers to sell old West style six shooters), they can sell “assault rifles,” shotguns and semi-automatic pistols to any and all public officials, just so long as it is in the scope of his or her duties.

The exemption brings up an interesting question: if every incarnation and permutation of “assault weapons” are made illegal to own, then why would law enforcers and public officials need access to a weapon that is no longer manufactured for private use?

The answer seems simple enough: law enforcement needs access to “assault weapons” because there might be, just maybe, violent, shadowy, lone wolves out there who, because of a budding black market for such murderous weapons, procured such a weapon for the purpose of massacring innocent Missourians; and therefore, law enforcement officials must meet force with force.

In using the aforementioned response to answer the above question, supporters of Ellinger’s fatwa on “assault weapons” must concede that the proposed solution to gun violence, banning all scary looking guns, may not necessarily be the best or even a subaltern solution to the supposed plague of gun violence destroying the country’s moral fibers.

Indeed, if banning such weapons was a prudent, sober and effective solution to ameliorating and stopping gun violence, then police officials would not need the “assault weapons” that Missourians may be prohibited from purchasing.

Ellinger’s ludicrous legislative proposal, in its truest form, is a superfluous suggestion brought to the General Assembly by a vainglorious representative hoping to push a puffed up agenda through the Cave of Winds.

Hopefully the cantankerous contagion that is anti-gunning, which fixates on rambunctious legislators proposing hyper-reactionary anti-gun measures, is contained within the Show-Me State, but somehow I think the contagion will spread.

Fix contributor Christopher White is a graduate student at the University of Missouri.