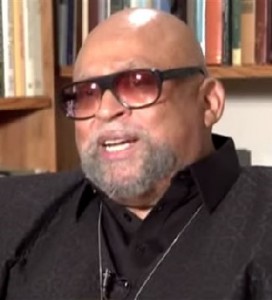 The Washington Times reports that President Barack Obama praised Kwanzaa and its principles last Friday, the start of the weeklong annual tradition.

Kwanzaa, which runs through Jan. 1, is an observance developed by a man who currently works as a professor at Cal State University Long Beach as its Africana Studies department chair. Google this scholar for an eye-opening but not surprising journey, considering universities are where socialist ’60s radicals settle in with tenure to raise up a new generation of minions. Which brings us to Professor Maulana Karenga, a.k.a Ron Everett, a.k.a. the fake African who invented Kwanzaa, a fake African religious observance that honors socialist principles.

A column on this guy was written a few days ago by Ann Coulter, who – with her usual flair – whipped up a summary of the professor’s tumultuous past:

It is a fact that Kwanzaa was invented in 1966 by a black radical FBI stooge, Ron Karenga — aka Dr. Maulana Karenga — founder of United Slaves, a violent nationalist rival to the Black Panthers. He was also a dupe of the FBI.

In what was ultimately a foolish gamble, during the madness of the ’60s, the FBI encouraged the most extreme black nationalist organizations in order to discredit and split the left. The more preposterous the group, the better. By that criterion, Karenga’s United Slaves was perfect. In the annals of the American ’60s, Karenga was the Father Gapon, stooge of the czarist police. … United Slaves were proto-fascists, walking around in dashikis, gunning down Black Panthers and adopting invented “African” names. …

When Karenga was asked to distinguish Kawaida, the philosophy underlying Kwanzaa, from “classical Marxism,” he essentially said that, under Kawaida, we also hate whites.

That’s not even the worst of it. Karenga also served time for sexual assault. But “it wasn’t mere assault Karenga was convicted of,” reports the Publius Forum, citing an investigative report that delved into decades-old newspaper clippings and court documents on his conviction.

“It was the sexual assault and even torture that he perpetrated against some of his own female followers,” the Forum notes. “At the time, The L.A. Times reported that he placed a hot soldering iron in one woman’s mouth and used a vise to crush another’s toe, of all things.”

The investigative report published by FrontPage Magazine offers more on the man:

Karenga’s real name is Ron N. Everett. In the ’60s, he awarded himself the title “maulana,” Swahili for “master teacher.” He was born on a poultry farm in Maryland, the fourteenth child of a Baptist minister. He came to California in the late 1950s to attend Los Angeles Community College. He moved on to UCLA, where he got a Master’s degree in political science and African Studies. By the mid-1960s, he had established himself as a leading “cultural nationalist.” That is a term that had some meaning in the ’60s, mainly as a way of distinguishing Karenga’s followers from the Black Panthers, who were conventional Marxists.

Another way of distinguishing might be to think of Karenga’s gang as the Crips and the Panthers as the bloods. Despite all their rhetoric about white people, they reserved their most vicious violence for each other.

And so it was that this radical, ex-con, FBI patsy, communist revolutionary created Kwanzaa.

This fake holiday is only made worse by the principles it espouses. A lot has been written about its seven pillars: unity, self determination, collective work and responsibility, cooperative economics, purpose, creativity and faith. That it reads like a communist manifesto is certainly obvious.

But one commentary that stands out, by Patrick S. Poole, notes some of the ultimate irony of this “African” holiday:

The third-day principle of Kwanzaa, Ujima, promotes the tribal concept of collective work. While this is indeed a tribal element still practiced in Africa, it is the specialization and division of labor that has allowed the West to flourish over the past two hundred years. It is the reason why Masai and Zulu tribesmen still live in grass huts, wear animal skins and must walk everywhere. It is a good thing that today we do not have to grow our food, build our houses and tend to our own lands. Division of labor and specialization has fueled the prosperity and progress in the West that all Africans envy. And yet it is the express denial of these important economic tools that Kwanzaa lauds.

The fourth-day principle of Kwanzaa, Ujamaa, praises “cooperative economics” (a warm euphemism for communism). Understanding that Professor Karenga formulated Kwanzaa in the heady days of the sixties, it is not necessary to iterate the litany of crimes against humanity that have been wrought at the hands of communist regimes in the past this century. It is worthy to note, however, that communism is in ascendancy on the African continent with large support from the glitterati of the Black Left in America. …

The claims by Kwanzaa supporters that the holiday is purely a cultural festival, as opposed to a religious celebration, are ludicrous. The term “Kwanzaa” is derived from the Swahili phrase “matunda ya kwanza”, which denotes the pagan rites associated with the first fruits of harvest. Kwanzaa is packaged for mass American consumption as a cultural and ethnic rite, and yet carries presuppositions which stand as a religious challenger to Christianity and Judaism, two religious traditions birthed and nurtured in Africa, because they include too many white people.

Keep in mind, according to Karenga’s online bio, “Dr. Karenga is author of numerous scholarly articles and books, including: Introduction to Black Studies, the most widely used introductory text in Black/Africana Studies.” Yep, he’s also the mastermind behind what students are taught in their mandated diversity courses across the country.