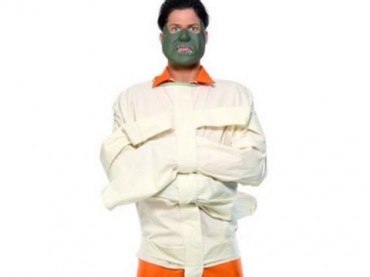 Several universities have recently admonished their students not to wear a variety of costumes for Halloween that could potentially offend people, frighten people, or reinforce stereotypes.

At the University of Wisconsin-Madison, for example, some students were warned against donning a Hannibal Lecter-inspired straightjacket costume because it’s offensive to people who struggle with a mental illness.

At the University of Southern Maine, two students wearing Ebola suits to a party prompted massive outrage, a situation that ultimately involved a call to the police.

And at Lehigh University, the entire Greek system has been warned not to host Halloween-themed parties on – or off – campus that could potentially upset any number of people.

Move over, war on Christmas – the war on Halloween on campuses across the country is in full effect.

Some universities offer subtle reminders to students, just little nudges from the campus politically correct police. An email to students at the University of Michigan on Oct. 29 titled “Halloween Safety” reminded readers to “choose a Halloween costume that does not disrespect others by promoting racial, cultural, gender or other stereotypes,” according to a copy of the email obtained by The College Fix.

But some go way overboard. Take this email recently sent to some University of Wisconsin-Madison students by one of its Residence Life coordinators:

Halloween: Questions to Ask Yourself before Donning a Costume

Ask yourself: Is the humor based on “making fun” of real people, real human traits or cultures?Though intended to be funny, the “Mental Patient” costume by Disguise was considered demeaning, dehumanizing, and humiliating to individuals struggling with a mental illness and their families. Complete with a “Hannibal” type mask and a straightjacket, the costume reinforced stereotypes and fears about persons with mental illness.

Ask yourself: Is the “fear factor” based on real forms of violence or grotesque depictions of human traits? “This scary stud can empty out a full house just by walking through the door,” touts the tag line for Fright Catalog’s “Vato Loco” mask. The bandana clad, tattooed, brown-skinned vinyl creation makes light of gang violence, which takes a serious toll on families and neighborhoods across the country. The costume also sends the message that Latinos are violent.

Ask yourself: If the costume is meant to be historical, does it further misinformation or historical and cultural inaccuracies? The “Indian” get-up prevails each year as culture-turned-costume. But did you know few Native Americans wore buckskin and headbands and even fewer wore them together? Did you know “war paint” and feathers carry religious meaning and were never worn by Native American children?

Ask yourself: If the costume is meant to be beautiful, are these characteristics drawn from commercial references, such as movie characters? Too often, beautiful at Halloween means white, blonde, princess masks. What statement does your Halloween costume make about what constitutes beauty — and about who is beautiful and who isn’t?

“While some of the points she makes are legitimate – individuals certainly ought to think before donning a costume, especially in a place with so many international students and professors – I don’t really think that’s the issue here,” said the UW-M student who emailed the memo to The College Fix.

“We are college students and (supposedly) responsible, educated adults. Why, then, does our university feel the need to micromanage our lives? By attempting to impose their liberal ideals on our every move and action (“…what constitutes beauty…” etc.), they deny us the right to think for ourselves and, perhaps, learn from our own mistakes.”

The University of Wisconsin-Madison is not the only university to take political correctness to the next level in time for Halloween.

The University of Minnesota sent a letter to students “encouraging them to avoid ‘culturally insensitive’ costumes that might also land them in trouble with the university.” Specifically cited by UM are “costumes [that] inappropriately perpetuate racial, cultural and gender stereotypes.”

At the University of Southern Maine, where two students were chastised for wearing Ebola suit costumes, a student who was offended by the costumes told the Bangor Daily News: “There was a dead silence in the room, and you could see it on everyone’s faces, we were all terrified… I was thinking the worst, and I know everyone else was thinking the worst, too… We all thought the campus had become a control center.”

The university wants to use the Ebola nurse costume incident to “educate people about how something that was done in the spirit of having fun can be perceived as disrespectful and offensive to others,” USM’s dean of students Joy Pufhal told the Bangor Daily News.

Meanwhile, at Lehigh University in Bethlehem, Penn., there’s new policy for Greek events aimed at preventing offensive parties and costumes throughout the year – but especially at holiday celebrations.

“We confront and reject discrimination in all its forms, including that based on age, color, disability, gender identity, genetic information, marital status, national  or ethnic origin, political beliefs, race, religion, sex, sexual orientation, socio-economics, veteran status, or any differences that have been excuses for misunderstanding, dissension, or hatred,” the policy states.

“In the spirit of this statement, our belief is that any event sponsored or endorsed by a Fraternity or Sorority in Lehigh’s Greek Community, may not discriminate against any class listed above. Failure to adhere to this … would result in investigation and adjudication …. This includes on and off-campus events, activities and actions as well as actions taken on-line via use of social media.”

So much for people’s private lives staying private. The PC campus police at Lehigh presume to dictate how students operate everywhere, period.

Requests by The College Fix for details about this policy were not immediately returned.

This year’s admonishments follow along similar ones established in year’s past.

And the University of Colorado Boulder told students in a memo that “sombreros … geishas, ‘squaws,’ … cowboys and Indians” all fall under the insensitive category.

CORRECTION: An earlier edition of this article stated the cops were called on students wearing Ebola suits. In fact the students in the costumes reportedly called the police because they felt threatened.