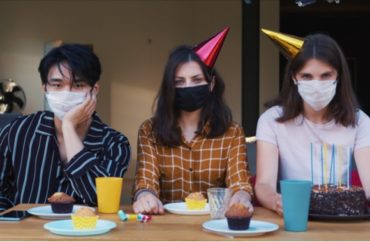 Unlike in prison, you’re unlikely to get seriously ill with COVID-19 at Harvard University. But like in prison, private eyes are watching your every move.

The Ivy League university not only coerced students into pledging an oath not to violate social distancing rules in order to live on campus, but it’s encouraging rat finks to provide evidence of their peers behaving like ordinary college kids.

Harvard created a new online “form for reporting social distancing violations” that includes “space for photos and videos,” The Harvard Crimson reports. It basically sounds like a police report, asking the rat fink to provide full details of the incident. (Allegedly they won’t be able to file anonymously. Let’s see if Harvard keeps it that way.)

Once the newly created “Community Council” receives a report from a rat fink, the “perpetrator” may get an “oral warning” for low-level offenses (undefined) or a formal review for more serious acts of hanging out with people.

Science tells us that young adults are at extremely low risk for serious illness or death from COVID-19. CDC data shows only 0.2 percent of deaths have been in those under age 25.

The review includes a limited gag order that prevents the target from telling others at the soiree that they’re under investigation:

If the review involves more than one student, those implicated in a given incident may access “redacted” versions of their peers’ statements before formally meeting with the council, if they are requested to do so.

The “need to know” exception to the gag order is extended to family, clergy, legal counsel and mental health professionals. A “community health lead” is provided to the targeted student for “support” during the review.

The council chair gets to decide whether the initial review is worth passing to the full council for review. Each review includes eight “team” members, who get to question the targeted student. They decide guilt via “simple majority.”  (The article doesn’t explain why an even number of people is voting, or what happens if there’s a tie.)

Yes, cases will increase among young people as they socially interact, but that shouldn’t be a cause for panic if people adhere to CDC mitigation measures to protect the vulnerable.

One thing that jumps out: The evidence standard is “sufficiently persuaded,” and the article doesn’t say whether it’s defined. It’s the same standard used against a student, the TV writer Damilare Sonoiki, who was accused of rape right before he graduated in 2013, leading Harvard to withhold his diploma. He sued because “sufficiently persuaded” was not defined anywhere, making his Harvard contract unenforceable, in his view. (A judge disagreed earlier this summer.)

While being judged guilty under this undefined evidence standard may only lead to a sanction of “educational engagement,” the council also has the power to make students homeless for two semesters if they are “sufficiently persuaded” that a “serious” violation or “series” of “less serious” violations has occurred (surprise: none defined).

Much like those who are found guilty of sexual misconduct in similar kangaroo courts, even after their sentence is complete, students caught hanging out still have to beg to be allowed back on campus:

In order to become eligible for residential housing after removal, a student must submit a statement to the council chair and the Dean of Students Katie G. O’Dair addressing the cause for their dismissal and suitability of their return to campus dorms. The Dean of Students Office will determine whether the student may return to residential housing.

If schools send students home, they will create greater health risks for the nation. Homes are higher-risk settings than schools and are more likely to include older family members. Global data consistently show that homes are where most cases spread.

Harvard’s process already looks like it runs afoul of the Foundation for Individual Rights in Education’s recent guidance for permissible restrictions related to COVID-19, due to its chronic ambiguity.

The rat-fink reporting method and lack of guidelines for the council are likely to lead to disparate enforcement and uneven treatment of similar parties and similar conduct, both of which violate FIRE’s guidance.

Removal from campus housing also exceeds FIRE’s “medical necessity” emphasis, which says forced quarantine and remote work are tailored to the supposed public health risk of students having fun together, unlike eviction and suspension.

“Unfortunately, FIRE anticipates that institutions will attempt to justify certain violations of student and faculty rights by reference to the present threat to public health,” the civil liberties group said, inviting victims of university injustice to contact FIRE.