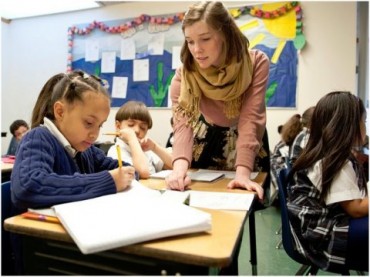 A whole dozen members of the Student Labor Action Movement (SLAM) protested outside Harvard’s Massachusetts Hall to give President Drew G. Faust a letter demanding she cut all ties with the group Teach For America — if the organization doesn’t make some changes, that is.

SLAM is miffed because, it claims, TFA’s two-year (teaching) requirement “undermines the quality of public education.”

“We’re calling on Harvard to support and provide the resources for people who want want to have lifelong careers in public education, not people who want to teach for a couple of years and then go to law school or business school,” said Blake A. McGhghy ’17, a SLAM member who spearheaded the Harvard branch of the campaign.

The letter to Faust addresses three areas in which students hope to see reforms to Teach For America: demanding the organization only send students to areas in which there is a teaching shortage, providing corps members more education and training, and cutting ties with corporations the students think threaten teachers unions such as Exxon Mobil and JPMorgan Chase.

The caption under this photo says the protesters were chanting “education not privatization” … said protesters apparently missing the irony that they attend the most elite private university in the country.

But, it seems SLAM doesn’t believe this amounts to “education justice.”