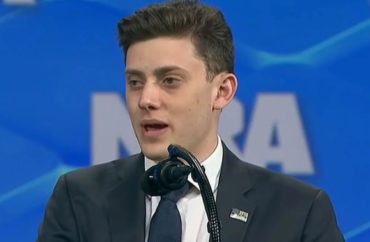 Conservative Parkland shooting survivor and pro-Second Amendment activist Kyle Kashuv announced Monday that Harvard University had rescinded his acceptance for the class of 2023.

Kashuv has come under fire in recent weeks after screenshots were unearthed showing the teen using racial slurs in a Google document and text messages a couple years ago. Upon the revelation of the slurs, Kashuv promptly issued a lengthy apology.

“We were 16-year-olds making idiotic comments, using callous and inflammatory language in an effort to be as extreme and shocking as possible. I’m embarrassed by it, but I want to be clear that the comments I made are not indicative of who I am or who I’ve become in the years since,” Kashuv wrote in his late-May public apology.

“… I can and will do better moving forward.”

In a Twitter thread Monday, Kashuv said that after his comments were publicized, “former peers and political opponents began contacting Harvard urging them to rescind me.”

Harvard subsequently launched a probe, asking Kashuv provide “a full accounting of any such statements you have authored, including not only those discussed in the media, but any others as well.”

Three months after being admitted to Harvard Class of 2023, Harvard has decided to rescind my admission over texts and comments made nearly two years ago, months prior to the shooting.

I have some thoughts. Here’s what happened.

The school told Kashuv that it reserved the right to “withdraw an offer of admission under various conditions, including ‘if you engage or have engaged in behavior that brings into question your honesty, maturity, or moral character.'”

Kushuv tried to make it right, noting “I also sent an email to the Office of Diversity and Inclusion to seek guidance on how to right this wrong and work with them once I was on campus.”

The school’s dean of admissions subsequently told Kashuv that he had had his acceptance rescinded after the admissions committee “discussed at length” the situation. Harvard also denied Kashuv’s request for an in-person meeting to plead his case.

The obscene remarks were written before the Feb. 2018 shooting at Marjory Stoneman Douglas High School in Parkland, Florida, that claimed the lives of 17 students and thrust the campus into the national spotlight.

In May, news of Kashuv’s remarks as a 16-year-old surfaced. Vox reports:

In the Google doc, a venue teens frequently use as an unmonitored digital chat platform, Kashuv typed a racial slur over and over again, even bragging that “im really good at typing ni**er ok like practice uhhhhhh makes perfect.” The text messages are arguably worse — he demeans a female classmate by saying she only “goes for ni**erjocks,” suggesting that she would prefer such black men sexually to a “pasty jew” (it’s not clear from the screenshots what the context for this is).

Kashuv gained prominence following the shooting after refusing to join his fellow survivors in pushing for gun control legislation, instead becoming a gun-rights activist.

On Twitter on Monday, Kashuv slammed Harvard for what he suggested was institutional hypocrisy.

“Throughout its history, Harvard’s faculty has included slave owners, segregationists, bigots and antisemites. If Harvard is suggesting that growth isn’t possible and that our past defines our future, then Harvard is an inherently racist institution. But I don’t believe that. I believe that institutions and people can grow. I’ve said that repeatedly. In the end, this isn’t about me, it’s about whether we live in a society in which forgiveness is possible or mistakes brand you as irredeemable, as Harvard has decided for me,” he wrote.

MORE: Parkland, Florida students to share their ‘expertise’ at Harvard