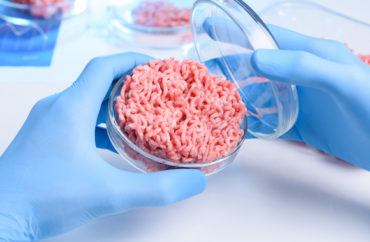 The texture is now more ‘realistic,’ according to report

The Harvard Crimson reports that scientists at the Ivy League university have achieved a “breakthrough” in the production of lab-grown fake meat, reportedly creating a mock meat substance with a chewier, “realistic texture.”

The Harvard team behind the faux-meat substance had reportedly been growing what one researcher described as a “pile of cells,” a formless blob of synthetic protein. That deprived eaters of the familiar consistency offered by real meat.

Yet the scientists were able to “induce cow and rabbit muscle cells to grow on gelatin scaffolds,” after which the cells “crawl[ed] inside and organized into tissue that looks and feels a lot like meat:”

Postdoctoral research fellow Christophe O. Chantre, who co-authored the study, said that while alternative meat products like the Impossible Burger are currently “wildly popular,” he believes lab-grown meat is on the cusp of exploding in popularity.

“I think this is really going to become actually a big part of our market of meat as we move forward in the next couple decades,” he said. “And it has these added benefits that it uses a lot less resources and eliminates cruel animal treatments.”

MacQueen said such ethical implications motivated him throughout the project.

“I like meat a lot, and I like animals a lot, so if I got to have my meat without killing them, then I would,” he said. “I would be a consumer of this product.”

Chantre noted that lab-grown meat is considerably more expensive than its natural-grown predecessor, though he claimed that the high cost was “definitely something that will be addressed with scale.”