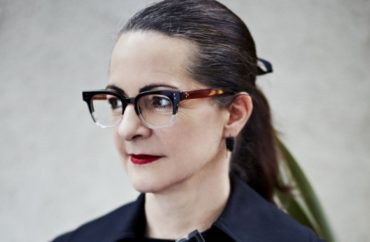 When Goldsmiths, University of London was looking for a new leader who would reorient its fight against climate change, it looked past those who were conventionally qualified, such as environmental scientists.

The British university chose someone with more intuitive insights: a fashion expert.

Frances Corner (above) assumed the role of warden at the British university this month, a position equivalent to vice chancellor. And the newcomer wasted little time exerting her full authority to respond to the “climate emergency.”

She banned beef from Goldsmiths’ campus and enacted the equivalent of a 12-cent tax on water bottles and single-use plastic cups – decisions that may bring to mind the regulatory overreach that led the United Colonies to break free from Britain.

It’s part of Goldsmiths’ plan to become a “carbon neutral organisation” by 2025, according to an announcement by the university.

Corner is also pledging to install “significantly more” solar panels and switch to a “100% clean energy supplier as soon as practicable.” She wants to make courses on climate change and carbon emission reduction more accessible to students, though the university does not specify the curricula of these programs, or which academic departments will foster them.

Goldsmiths’ press office has ignored several College Fix requests to explain how the food menu is changing beyond the removal of beef, specifically what items will remain that are also considered environmentally harmful.

The United Kingdom’s Committee on Climate Change says that most greenhouse gases produced by British farms come from lamb, beef and dairy production, according to CNN. Corner herself shared an opinion piece arguing that milk should also be banned from campus.

MORE: Anti-Israel group tries to get hummus banned from university

Why canteens should stop serving beef – and probably milk too https://t.co/EQYVTW1DkF

Advocates for government control of the economy

It’s a sweeping agenda for an academic who has only written books about fashion.

According to Corner’s website, she previously led the London College of Fashion, currently chairs the International Foundation of Fashion Technology Institutes, and was named to the Business of Fashion 500.

But Corner says her passion is using fashion “as an agent for innovation and change,” and it’s evident in her environmentalist streak, which advocates for government control of the economy to save the planet.

Her Twitter profile, which is heavy on retweets, mixes topics that vary from fashion to politics and social justice.

Corner has retweeted Greta Thunberg, a teenage Swedish climate activist, as well as the United Nations, the Environmental Audit Committee and other contemporary voices and bodies that call for institutional, mass-scale action against climate change.

The new Goldsmiths warden also retweeted a Guardian editorial that calls for the implementation of the American Green New Deal as soon as possible.

“Declaring a climate emergency cannot be empty words,” Corner said in Goldsmiths’ announcement of the beef ban and bottle tax. “I truly believe we face a defining moment in global history,” which is why Goldsmiths is “willing to call the alarm and take urgent action to cut carbon use.”

The university has been silent on how else the menu is changing under Corner’s direction. If it continues to serve lamb, which is a bigger part of Muslim diets, and dairy products such as cheese and ice cream, Goldsmiths remains complicit in the most polluting farm outputs in England.

As of last semester, Goldsmiths’ menu featured various beef-oriented entrees on a daily basis. They included lasagne, ragu, meatballs and Malasian beef rendang, but also a “Burger Bar” with both beef and vegetable burgers. Now, students will be relegated to one option at the Burger Bar.

Every G7 country should have a feminist foreign policy https://t.co/eesDnGDKue

Beef consumption has been falling for decades without government restrictions

Just how detrimental beef production is to the environment is an open question.

A 2013 United Nations study concluded that all animal agriculture accounted for approximately 14.5 percent of man-made emissions, with cattle making up 41 percent of that figure. That makes cattle responsible for about 6 percent of total emissions.

Beef has a higher ”emission-intensity” than chicken and pork products, according to the U.N., which cites the larger land mass required for cattle to graze and roam.

More recently, other statistics have thrown cold water on the alarmism embraced by Corner and other environmental activists.

The World Resources Institute, founded in 1982 to reject the “prevailing activist model” in favor of evidence-based scientific research, released an analysis of the environmental impact of beef consumption the same month that Goldsmiths announced Corner’s hire.

“Do we all need to stop eating beef in order to curb climate change?” the organization asked. Its short answer: “No.”

American consumption of beef has fallen by a third since the 1970s without regulatory moves to restrict beef, and Americans could still eat 1.5 burgers a week without any further agricultural expansion, the institute wrote. (Beef consumption is on the rise worldwide, however, according to CNBC.)

WRI cites a 2019 study in a scientific academic journal, Agricultural Systems, that estimates emissions derived from beef production are just “3 percent of total U.S. emissions.” Removing all animals from U.S. agriculture would only cut domestic emissions by 3 percent, according to a 2017 study in the Proceedings of the National Academy of Sciences, also cited by WRI.

MORE: Why stop at beef? Here are more things universities can ban

Corner’s culinary command-and-control does not seem to be based on a rigorous statistical analysis of how one college campus – in a country much smaller than the United States – could improve the overall condition of the environment, however.

Goldsmiths is pursuing green initiatives alongside various other promises by the new warden, and her policies go beyond culinary regulation, clean emissions and eco-curricula.

Going further than many American universities, Goldsmiths’ announcement on the “climate emergency” said it will transition the entirety of its already invested capital toward eco-friendly companies.

Starting in December, its £2.5 endowment will excise investments in companies that get more than 10 percent of their revenue from “the extraction of fossil fuels, the university said. This is part of a move by its endowment manager, the CCLA Charities Ethical Investment Fund, to divest from fossil-fuel companies.

“Though I have only just arrived at Goldsmiths,” Corner said, “it is immediately obvious that our staff and students … are determined to help deliver the step change we need to cut our carbon footprint drastically and as quickly as possible.”

Neither Corner nor the university explained whether it had conducted research on student support for specific green-minded measures, particularly those that restrict their dining options and increase the cost of basic consumer products such as bottled water.