Space for the event was very limited and according to the Facebook event page it was filled to capacity at eight students, included a waiting list, and took place Friday night. Student organizers did not respond to numerous requests for comment from The College Fix sent over the last several days seeking details. 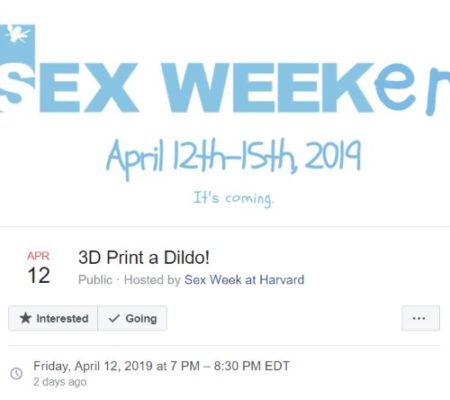 A disclaimer urged students that the “printed designs are not intended for external use.” Organizers did not respond to requests for comment asking why, but a 2014 article on Mashable stated that while 3D printing sex toys is becoming more common, there are downsides.

“3D-printed sex toys are particularly dangerous for two reasons: The surface is too rough for immediate use, and microscopic gaps in the toy that are almost impossible to disinfect can store bodily fluid and bacteria,” it reported. “Even if you sand down the surface of a 3D-printed toy, it’s not totally safe.”

Additional workshops slated to take place include: “Religion and Spirituality: Conversations on Sex and BGLTQ Identity,” “Sex Positions 101, RUS’s Annual Orgasm Seminar,” “Am I Allergic to Sex? Pain, Discomfort, and Allergies in the Bedroom,” and “From Turn-Ons to Red Flags: Relationships, Sex, and Communication.”

Today, we explored the negative messages about our bodies, connection, and pleasure&orgasm at @harvardsexweek.

We also talked about the anatomy of pleasure & the pieces still missing from research and conversation.
Image: Cecilia w/#VoulaTheVulva and the Penis from @iheartguts pic.twitter.com/pdPN7r1Gaa

“Sex Week at Harvard strives to empower the Harvard community to explore issues of love, sex, sexuality, gender, and gender identity, and relationships,” its website states. “As an annual campus-wide collaborative effort, Sex Week is positioned to actively engage Harvard students in embracing, thinking about, and discussing their experiences with their own sexualities.”