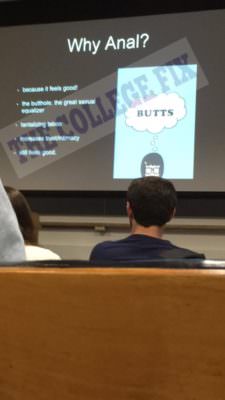 Identifying the event with the sexual positivity movement, Natasha said the goal was to “encourage people to go after their desires and not feel shame.”

“Come up front guys, were gonna have some dirty fun,” she said as the presentation began.

Noting “not all men have penises, not all women have vaginas,” she added “the butthole is the great sexual equalizer. All humans have a butthole.”

A slide shown during the event listed other perks: “because it feels good,” “tantalizing taboo” and “increases truth/intimacy.”

“You couldn’t be fucked in the ass in Texas until about 10 minutes ago,” she said.

Natasha also denounced abstinence, saying “it doesn’t make any fucking sense” and that “the population of priests and nuns are declining.”

The event closed with a raffle for expensive sex toys, including butt plugs and vibrators. The butt plugs used during the demonstration were handed back to organizers.

Students were also allowed to take whatever they wanted from a bountiful amount of male and female condoms, sex toy cleaners, and literature from Planned Parenthood.

Current members of Harvard’s student sexual education group, Sexual Health Education and Advocacy Throughout Harvard, or SHEATH, which organizes Sex Week, lobbied to bring it back.