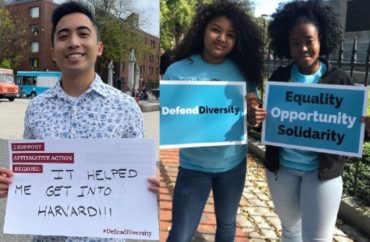 Harvard University students who travel to the Supreme Court to rally in support of affirmative action and the institution’s racial quota system will get $2,700 in funds to do so.

The Harvard Undergraduate Association approved a request from the Affirmative Action Coalition on campus for $2,700 from its new “Social Life Fund,” the campus newspaper reported.

The student activists “acquired funding for transportation and lodging through other sources, including the NAACP’s Legal Defense Fund, but meal subsidies had yet to be covered,” The Harvard Crimson reported.

The group expects 90 students to attend the protests at the Supreme Court where attorneys representing the Ivy League school will argue in support of racial quotas in admissions on October 31. The students also plan to participate in an activist training the weekend prior.

A slide from the October 16 meeting noted that the affirmative action group’s “work aligns perfectly with the HUA and Harvard College (to produce citizen leaders)” and the activists’ goal “to preserve diversity among Harvard’s undergraduate population.” 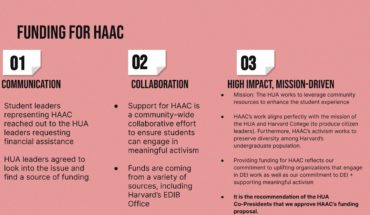 The HUA does not want the protests and rallies from students to just stop at affirmative action, however.

“The Well-Being Team also proposed an ‘HUA Helps’ initiative, which would earmark $6,000 of HUA funding to support students ‘hosting workshops, events, protests, and rallies,’” the campus newspaper reported. “The presentation cited meals and materials such as ‘posters and megaphones’ as potential expenses.” HUA approved the request.

The Dean of Students Office gave the student government $550,000 for its budget this year, a 10 percent increase, The Crimson reported.