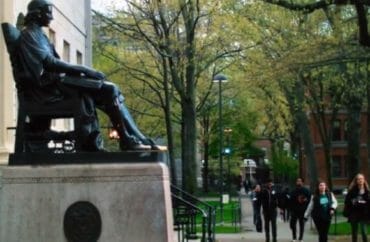 Effort aims to create ‘sense of belonging’ for women, minorities

A teaching hospital of Harvard Medical School will take down portraits of prestigious white male doctors that adorn a venerable amphitheater and scatter them throughout the grounds in a new diversity and inclusion effort.

Of the 31 various doctors and department heads that have their paintings hung in the Louis Bornstein Family Amphitheater at Brigham and Women’s Hospital, all are men, 30 are white, and one is Chinese. They’ve been described as “pioneers of medicine,” and getting a portrait hung there is something great to aspire to, according to the white male doctor who most recently had his image installed, Dr. Ron Walls, founding chair of the Department of Emergency Medicine.

But apparently having a cluster of white male doctors’ portraits — great as they may be — sends a message to employees and students that “white men are in charge,” Dr. Jeroan Allison, a professor at the University of Massachusetts Medical School who researches health disparities, told the Boston Globe, which first reported the news.

A hospital official told the Globe removing the portraits will create a “sense of belonging” for women and minority employees and students.

The Washington Free Beacon reported on some of the medical luminaries whose portraits will be swept off to lesser locations, including:

… Dr. Harvey Cushing, the “father of neurosurgery,” who studied at Harvard and Yale and became surgeon-in-chief at Peter Bent Brigham Hospital in 1913. Cushing operated on hundreds of patients each year with “remarkable results,” and his meticulous notes and case studies provided the “history of neurological medicine from its beginning.”

Another prominent portrait to be moved is Dr. William Councilman, the first chief pathologist at Brigham Hospital. Cushing described Councilman as “a man of ardent and generous enthusiasms” and an “inspiring teacher for the young and such a delightful companion both for young and old.”

The portraits of Cushing, Councilman, and Dr. Henry Christian, Brigham’s first chief of medicine, will be moved to the entrance of the Hale Building for Transformative Medicine. The Hale Building is named after Robert Hale Jr., a white male and CEO of Granite Telecommunications, who, along with his wife, donated $100 million to Brigham, the largest donation the hospital has ever received.

The hospital’s president, Dr. Betsy Nabel, told the Globe that moving the portraits is the right decision: “I have watched the faces of individuals as they have come into Bornstein. I have watched them look at the walls. I read on their faces ‘Interesting, but I am not represented here.’ That got me thinking maybe it’s time that we think about respecting our past in a different way.”