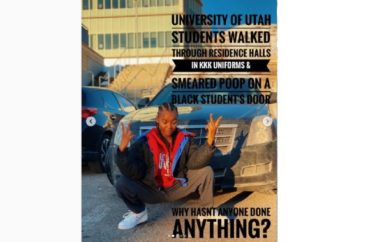 Administrators at a public university in Utah reopened investigations into several incidents on campus after a student created a social media post that merged two stories into one.

Police reports and obtained emails show the university trying to address the December 19 Instagram post quickly. A news release on December 19 acknowledge that there were two separate incidents but included a condemnation of white supremacy and the Klan.

“The university strongly condemns the KKK and white supremacy, as the values held by these groups are contradictory to a sense of safety and belonging for our community,” the statement through the diversity and equity office said. “We will continue to name racist acts, investigate, and hold the perpetrators of these hateful acts accountable when they are identified.”

The incident is still considered “in review.”

But documents obtained by The College Fix through a public records request show university staff following up on empty leads. One email seems to indicate that Thandiwe learned about the two separate incidents through improper channels.

She did not respond to multiple requests for comment sent in the past three weeks to her Instagram.

Reports reviewed by The Fix show that the police and university employees could not find evidence of Ku Klux Klan recruitment on campus and the rumor all came from a hearsay report from one student staff member.

The diversity office’s statement said university investigators “were unable to corroborate details of the event or identify anyone who may have been involved.”

Spokesperson Rebecca Walsh would not tell The Fix how the university planned to proceed with an investigation and if there had been any new evidence submitted after the inquiries were closed this fall semester. She shared instead a link to the diversity office’s statement.

Thandiwe created a story out of the Klan accusation and the poop vandalism.

“It is apparent that [Hannah Thandiwe] knew about both incidents and decided to merge them into one to voice herself and bring concerns and fear to many other students, parents, and employees of the University of Utah,” an email from an unknown employee to a Detective Chavez said. “However, I don’t know if she knew they were two separate incidents or was she told by her supervisor, who looked up the information, that it was one incident.” 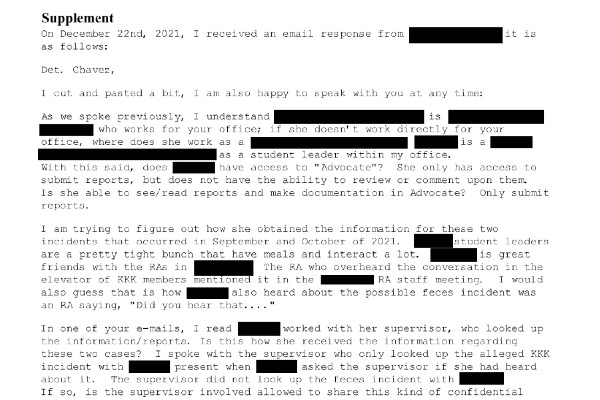 The black female student who said someone smeared poop on her door told police during a follow-up interview that she did not have anything further on the situation.

“I asked how she was doing and if she had any further issues with anyone harassing her,” a December 21 police report said. “[The student] stated she has had no problems ever since the September occurrence; said she has moved out of campus. I asked if I could do anything for her, and she said no, she was doing okay.”

The university reviewed footage of the dorm building where the Ku Klux Klan allegedly were roaming around to recruit students and did not see anything conclusive for the incident that allegedly occurred in October. The feces smearing incident occurred a month prior.

“The report that [redacted] gave to the university was that he overheard some students talking about some people in white KKK like attired [sic] that were trying to recruit people [in the dorms],” one supplementary section said. The people who “overheard” the allegations said the incident had been reported to the front desk of residence hall but the police determined this was not true. 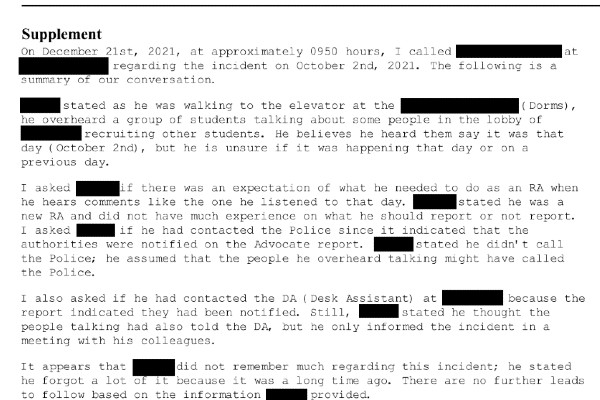 “[The resident assistant’s] response was fundamental, stating that he was passing by when he overheard this information,” the notes on a November 2021 interview said. “He had no information regarding the students, nor did he follow up on his heard comments. He never addressed the question about who contacted the police. He did indicate that this information was reported to ‘DA’ ( Desk Assistant).”

An unknown employee on November 4 “confirmed that no one had reported anything concerning this racial incident to any of her [desk assistants], but would look into it and follow up.”

The resident assistant told police in December “he assumed that the people he overheard talking might have called the police,” according to a police report.

The student, who said he was a “new” resident assistant, “only informed the incident in a meeting with his colleagues.”

But an October 3 incident report said the RA “overheard [on October 2] some students mentioning that there were some people in white KKK-like attire that were trying to recruit people. It sounded like they told the front desk and authorities were called.”

“As a second check I checked cameras for 11/30/21 – 10/2/21 to see if I could locate anyone approaching others (interior and exterior to the building) and could not see anything unusual,” one email from university staff said, quoting from a report. The officer likely meant he checked the cameras starting on September 30.

Only 35 minutes after the black student posted the story, someone at the university received an email with the subject line “Are you aware of this?” The particular staff are not identifiable because almost all of the emails and names have been redacted.

“We were unable to find anything on camera, not find anyone that seen anything, and not identifying the residents who stated they heard from someone,” the first responder states.

An email to diversity and communications staff member Pamela Bishop, after the email about the scarce evidence for the KKK accusations, asks about how to respond on social media.

A staff member with the Racial & Bias Incident Response Team said neither of the incidents had been reported to the office.

The university did not provide The Fix any photos or video evidence of the alleged incidents, though the police report said it included poop vandalism.