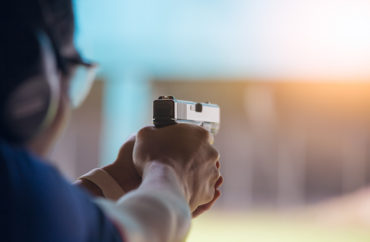 Another student complained, apparently without evidence, about possible ‘violent intentions’

Administrators at Long Island University Post recently called a student into a meeting after that student posted photos of himself on Facebook legally handing unloaded firearms at an off-campus event.

The meeting occurred after another student told the university that the student who handled the guns, Anand Venigalla, “might have violent intentions.” Neither the university nor the student appear to have had any evidence that Venigalla had any violent tendencies or desires whatsoever.

“By calling in a student for a mandatory meeting about photos of his participation in a recreational gun event, Long Island University has sent a message to its entire student body: Watch what you say,” said Sarah McLaughlin, a senior program officer at the Foundation for Individual Rights in Education, which reported on the story.

According to FIRE, the university claimed that “the meeting was not an investigation, but warned Venigalla that it was mandatory:”

FIRE first wrote to LIU on Aug. 31 to express its concerns about the school’s violation of its commitment to free expression, pointing out that “students cannot be summoned for questioning every time they post a photo of themselves engaging in recreational firearm use.”

During Venigalla’s meeting with LIU, the director also brought up an essay he wrote for a class on war, terrorism, and justice in November 2017. Venigalla mentioned in the essay that political violence against authorities, but not civilians, can be justified in certain situations, citing the Boston Tea Party as an example. It is not clear how the administration obtained the essay. The director also questioned Venigalla about a Facebook comment expressing disappointment over losing an election for a student government position, in which Venigalla said the Greek life system wields too much political power on campus. For LIU administrators, apparently three examples of constitutionally-protected speech somehow warrant a mandatory meeting with administrators.

“Free expression matters because it is through the unrestricted expression of ideas that we learn and grow in wisdom,” Venigalla said.

“LIU, apparently realizing that their case against Venigalla was meritless, declined to investigate further,” FIRE reports.

MORE: Dear higher education: You need to mellow out about guns