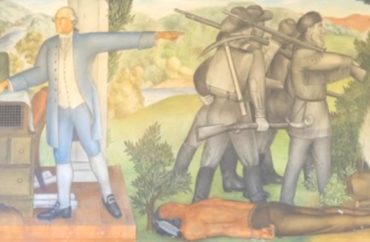 The controversy comes after a working group determined the mural, made up of several panels, “traumatizes students and community members.” But advocates for keeping the 83-year-old mural say that removing it ignores the intent of the artist and represents an attempt to erase history.

In 1936, Victor Arnautoff painted the 13 panels that make up the “Life of Washington” mural at the San Francisco Unified School District campus. Arnautoff was a prominent Russian-American painter who created the murals as part of a Works Progress Administration project undertaken during the New Deal.

But a working group that met in recent months determined the artwork is highly problematic and should be archived after being removed from the walls of the school.

“SFUSD convened a ‘Reflection and Action Working Group’ that was comprised of members of the local Native American community, students, school representatives, district representatives, local artists and historians,” Laura Dudnick, spokeswoman for the district, wrote in an email to The College Fix.

The group held four public meetings between December 2018 and February 2019 during which it received input on what to do with the mural. The group’s recommendation? Archive the mural to protect the experience of students.

“At its conclusion the group voted and the majority recommended that the ‘Life of Washington’ mural be archived and removed because the mural does not represent SFUSD values,” Dudnick’s email to The Fix continued, adding that the group considered the legacy of the artist when deciding whether or not to keep the mural up.

However, concern for the experience of students won out.

Two of the 13 panels are coming under fire for containing objectionable images, according to the Richmond District Blog.

One of the images involves involves Washington gesturing toward a group of explorers who are walking by the body of a presumably deceased Native American depicted in the color gray. Another depicts Washington next to several slaves performing various types of manual labor, a YouTube video of the murals showed.

We come to these recommendations due to the continued historical and current trauma of Native Americans and African Americans with these depictions in the mural that glorifies slavery, genocide, colonization, manifest destiny, white supremacy, oppression, etc. This mural doesn’t represent SFUSD values of social justice, diversity, united, student-centered. It’s not student-centered if it’s focused on the legacy of artists, rather than the experience of the students.

But Fergus M. Bordewich, a historian, wrote in The Wall Street Journal that the intention of the artist should be taken into account when considering the intent of the images:

The mural’s painter, Victor Arnautoff, was a protégé of Diego Rivera and a communist. He included those images not to glorify Washington, but rather to provoke a nuanced evaluation of his legacy. The scene with the dead Native American, for instance, calls attention to the price of “manifest destiny.” Arnautoff’s murals also portray the slaves with humanity and the several live Indians as vigorous and manly.

Bordewich, in a phone interview with The Fix, said there “is a deeply wrongheaded habit to project today’s norms, values, ideals backwards in time to find our ancestors inevitably falling short.”

The mural’s future is up in the air, according to Dudnick.

“The superintendent and staff are now reviewing the recommendation and considering the best course of action,” she wrote. “At this time there hasn’t yet been any recommendation put forth before the SF Board of Education on this matter.”

This is not the first time the murals have come under fire. In the late 1960s, protesters called for its removal, which the school responded to by installing another set of murals titled “Multi-Ethnic Heritage: Black, Asian, Native/Latin American.” These murals display more positive images of ethnic minorities, the Richmond District Blog reported.

“One of the main reasons why it is controversial is because back in the [1930s] when it was painted, George Washington was the saint of the people,” one student at George Washington High School told the Golden Gate Express. “I’ve talked to a bunch of students here and I honestly think that they agree it is the true depiction of history and that we all have to know who George Washington really was.”

Bordewich added that the “mural is not a celebration of genocide, it’s a challenge to westward expansion.”

“It’s incredibly stupid if we try to erase history,” he said. “It still happened, and you should argue about its meanings.”