Even though the Republican Party holds neither the White House nor majorities in the Senate and House of Representatives, a trio of history professors claim the GOP is moving the country to an authoritarian and white supremacist path.

Writing in the Courier Journal, Professor Emeritus Berry Craig points to Brian Clardy of Murray State University, who says the situation is “serious” and “frightening,” and alleges Donald Trump was elected “largely” due to white backlash after two terms of Barack Obama.

Clardy said that while attending Obama’s 2009 inauguration, he told a woman next to him that white folks “back home” were “seething.” (Such was this white anger that they re-elected Mr. Obama four years later.)

To head off the coming fascist danger, another professor emeritus, Morehead State’s John Hennen (who apparently had his television off throughout the summer of 2020) says “we must all become ‘antifa,’ or antifascists.” 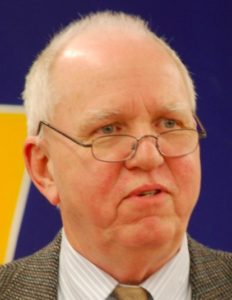 Craig (left), who taught at West Kentucky Community College, claims former President Trump and his supporters “ceaselessly demagogue” President Biden and Democrats, such as calling them “radical socialists” and “communists.”

MORE: Professor: The term ‘Nazi’ is ‘not strong enough’ to describe Trump supporters

While the GOP has little compunction about using such labels, Craig says Democrats aren’t willing to call out “Trumpism” for what it is: “a racist, sexist, xenophobic, homophobic and religiously bigoted movement that is anti-democratic and embraces violence and vigilantism.”

Clardy believes Democrats would do well to remind voters of just this in 2022 and 2024 — that “democracy itself will be on trial.”

Craig appears to have culled a lot of his Courier Journal piece from an article he wrote a month prior in Forward Kentucky, which bills itself as “the progressive voice for Kentucky politics.” In it, Craig quotes anti-Trump screeds from the likes of Slate’s Amanda Marcotte (“The country is sleepwalking its way into an authoritarian overthrow of democracy”), Vox’s Zack Beauchamp (questioning vote counts is “not the action of a party committed to the basic idea of open, representative government”) and “former Republican” Jennifer Rubin.

Like Professor Hennen in 2020, Craig must have kept his TV and computer off for most of this year given this far-left commentary … and the image used for the piece:

A week before this op-ed, Craig used the likes of Max Boot to claim that referring to Democrats as “socialists” is just an “all-purpose epithet that Republicans use to describe everything from an influx of undocumented immigrants to the supposed teaching of critical race theory to vaccine mandates.”

Craig then wonders why anyone has a problem with socialism in the first place — after all, he says, it “champion[s] civil, economic and political rights and individual liberties, such as free speech, a free press, and separation of church and state.”