Black student groups at Hofstra University are demanding the school adopt a zero tolerance stance against “hate speech,” one of 13 total demands sent to campus officials earlier this month.

According to The Hofstra Chronicle, the organizations — which include the Black Student Union, the Hofstra NAACP and a group called “Strictly Steppin’” among others — want “students, faculty and administrators equally accountable for any form of hate speech.”

Hate speech is defined by the coalition as “speech that is intended to cause harm, offends/insults or encourages violence toward an individual or group on the basis of race, sex, gender identity, gender expression, sexual orientation, religion, national origin, social or economic class, disability or other protected traits.”

Students in violation of the policy would face anything from a fine to expulsion, whereas faculty would be subject to an “investigation in accordance with Title IX.”

This demand also notes students want space at the end of semester evaluations to “speak freely about racism in classrooms.”

Further, the coalition wants Hofstra Public Safety to be held accountable “for the racist encounters that students have been recounting” on platforms such as the (anonymous) @blackathofstra Instagram page. 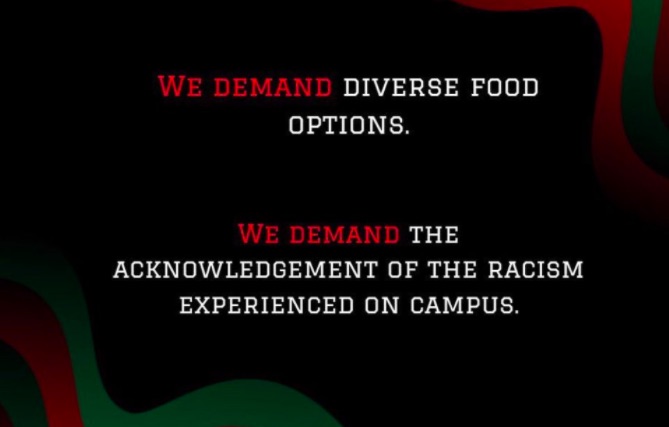 — Our own space. Because “under the eye of white students as well as other POC groups in which anti-blackness continues to be an unfortunate side effect of colonialism, Black students often feel pressured to code-switch in order to be more accepted by their white peers.”

— Amnesty for demonstrations. “In an effort to encourage activism and minimize repercussions, Black students are asking for amnesty for future on-campus demonstrations. We want students to feel as though they have the right to fight against racism and oppression without fear of punishment.”

— Diverse food options. “As Black students, we request for there to be more cultural options on the menu pertaining to soul food, Caribbean food and African food.” 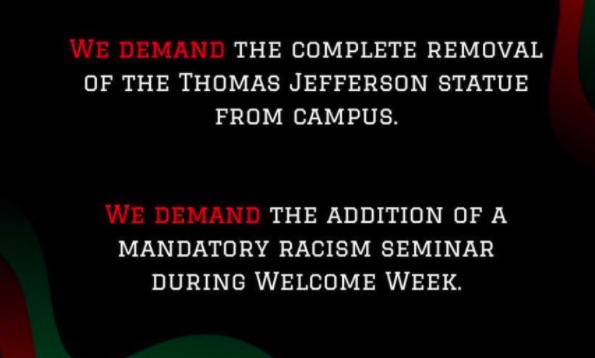 The groups also want a campus statue of Thomas Jefferson to be completely removed from school grounds. They say while they recognize Jefferson’s significance as a Founding Father and American president, of greater import is the fact he played a role in “the history of the enslavement of Black people” and has “no known significance to the history of Hofstra.”

Activists lobbied to have Jefferson removed over a year ago; in a compromise move this past June, Hofstra relocated the statue from the campus student center to behind a museum.

Regarding the demand list, a member of the coalition said “We don’t want it to be like a ‘white versus Black’ or ‘[white versus] people of color’ thing because, ultimately, the goal is for complete inclusivity. We’re just trying to make it better for us and being pro-Black doesn’t mean anti-white.”

Read the full list of demands and Chronicle article.