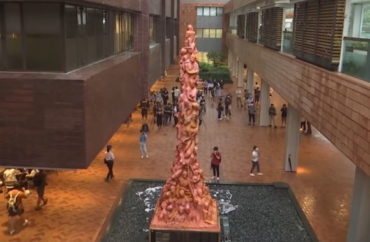 As of now, the monument still stands on campus, according to a student at the university

Hong Kong University, now under direct Chinese Communist Party control, has ordered that the “Pillar of Shame” sculpture be removed from campus.

The Pillar of Shame is a fiber cement statue dedicated to the protesters who were killed by the Chinese regime during the 1989 Tiananmen Square massacre.

“The sculpture shows 50 anguished faces and tortured bodies piled on one another, and has been on display at the university campus for more than two decades,” the Bangkok Post reports.

In a letter sent to pro-democracy student organizations, Hong Kong University demanded that members “immediately … make arrangements for the sculpture to be removed from the university’s premises.”

If it wasn’t gone by the mid-October deadline, it would be deemed abandoned and the university would have the authority to remove it at will, the letter added.

It still stands on campus, for now.

A student at Cornell University who is from Hong Kong texted a friend who attends Hong Kong University in late November on behalf of The College Fix to determine if the statue has been removed.

As of now, the sculpture remains, according to the source from Hong Kong. The student requested anonymity for fear of repercussions.

“The action against ‘The Pillar of Shame’ is the latest in a series aimed at purging the historical events of Tiananmen Square from Hong Kong’s collective memory,” opined Jillian Kay Melchior in The Wall Street Journal.

“…Watch next what happens in Hong Kong’s classrooms, libraries and history texts. The South China Morning Post reported this year that some teachers canceled their annual lessons on the Tiananmen Square massacre, fearing they could be targeted under the national-security law.”

Jens Galschiøt, the sculpture’s creator, told Al Jazeera in October — after the deadline had passed to remove it — that they need more time as it takes a while to move it properly. He said they’re looking at a possible new location in Taiwan.

The October legal demand letter was written by Mayer Brown, an American law firm based in Chicago. The law firm represents the geopolitical interests of the Chinese Communist Party over those of the United States government.

However, after receiving criticism from human rights groups and lawmakers, the firm ceased representing Hong Kong University on this matter, reports the Washington Post.

The coalition of activists had criticized Mayer Brown, arguing that the firm’s actions “violated its stated mission to make a positive difference in the lives of citizens in Hong Kong.”

“We therefore expect Mayer Brown law firm to safeguard their reputation and their integrity in defending the right of freedom of expression by rescinding their agreement with the University of Hong Kong.”

In 2019, China forcefully ended the one-country, two-systems arrangement, which was negotiated by the United Kingdom in the 1980s. It was supposed to remain through 2047.

Then, in 2020, the Chinese regime further reneged on this agreement when it passed the National Security Law, which enables severe punitive action against political dissenters.

Kungnen Kao, an international student from Hong Kong who attends Cornell University and is a pro-democracy activist, compared the likely and eventual removal of the statue to an Orwellian dystopia.

“Since the promulgation of the Hong Kong National Security Law, students in Hong Kong have no more academic freedom to express dissent against the Chinese Communist Party,” he said.

MORE: Why is Emerson College hiding photos of Winnie the Pooh? Because of China.