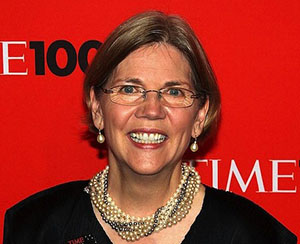 Liberal Democratic Sen. Elizabeth Warren has been in the news lately. A lot.

There’s buzz the Massachusetts lawmaker may be the emerging favorite as the 2016 Democrat presidential nominee instead of tired ol’ Hillary Clinton.

“Here in West Virginia — an early stage for Democrats with national ambitions going back to John F. Kennedy in 1960 — Warren was greeted as a progressive hero, with several attendees pleading with her to run for president,” The Washington Post reported Monday.

The Post added that Warren “excites the base” – including college-aged voters – and rallies critical small-dollar donations.

But over here at The College Fix, Warren excites us on a different level. She makes a great punchline. At least she has over the last few years, especially during her senatorial run.

Elizabeth Warren, liberal hero and self-appointed messiah for the 99 percent, is doing some serious damage control today. Currently running as a Democratic candidate for the U.S. Senate in Massachusetts, the Harvard professor apparently claimed for years to be Native American. Those claims have now come under serious scrutiny.

Allegedly, she used her supposed minority status to advance her career in academia for more than a decade. In her current job as a Harvard professor, Warren (herself a member of the 1%) reportedly makes more than $400,000 per year.

So what about all those claims to minority status?

Turns out you have to go back FIVE GENERATIONS to find even the thinnest Native American connection. Her great, great, great grandmother was, the campaign claims, a member of the Cherokee tribe. If such a flimsy connection is enough to claim minority status in this county, then we might as well say that the majority Americans are Native American “minorities.”

2. May 9, 2012: Elizabeth Warren’s Ancestor was Not a Cherokee, Was Not Even Nice to the Cherokee

No one living today should be held accountable for their distant ancestors’ actions, of course. But Warren specifically invoked her ancestry to curry favor at Harvard as a minority faculty member. The revelation that her ancestor was not a Cherokee–but in fact, a destroyer of the Cherokee nation–is truly a fitting punishment for trying to take advantage of such a trivial, and ultimately false, claim to minority status.

A group of Cherokee traveled to Massachusetts in order to express their concern about senate-candidate Elizabeth Warren’s false claims to Cherokee ancestry–claims which may have influenced the decisions of the Ivy League universities that hired her. Warren has refused to meet with the Cherokee.

Mass. Senate candidate Elizabeth Warren, who faked Cherokee ancestry in order to gain an edge in her career as a law professor, is also purported to have been a nationally recognized debate champion in high school. Oddly though, professor Paul Rahe of Hillsdale College, who attended high school with Warren and was active on the debate team, does not even remember her being on the team.

Speaking during a Boston radio interview on Monday, Harvard Law professor and Democratic Senate candidate Elizabeth Warren admitted that she has no license to practice law.

Let’s examine the ways Warren has betrayed the liberal principles she claims to represent.

In the months since knowledge of Warren’s deceptions became public, the blonde-haired, blue-eyed Warren has been able to offer no evidence of Native American lineage. She famously defended herself by saying that her grandfather had high cheekbones, “like all Indians do.” She was eventually caught having plagiarized recipes for a Native American cookbook. Even her thin claims to 1/32nd part Indian heritage proved baseless.

A 1997 article in the Fordham Law Review described Warren as Harvard Law School’s “first woman of color.” What she really is, it appears, is a white woman of European heritage who knew that universities like Harvard are under tremendous pressure to diversify their faculty. Nothing wrong with being white, except when you lie about it in order to get an edge over genuine racial minorities in the job market.

In an awkward and embarrassing first step as the new Senator-elect from Massachusetts, the ancestrally Caucasian turned self-proclaimed Native American Harvard Professor Elizabeth Warren had reporters in disbelief as she proved unable to handle even basic questions in her first post-election press conference.

Never one to miss an opportunity to position herself as the compassionate messiah, millionaire advocate for the nation’s poor and pretend Native American Senator Elizabeth Warren D-MA, has now taken up the cause of student loan reform. She wants to force banks to lower interest rates. Only problem is, she’s got the facts wrong, and, oh yeah, she’s lying. College Fix contributor Ian Tuttle, of St. John’s College, writes for National Review:

Warren, for her political convenience, has studiously misrepresented the interest rates extended to banks. “The banks pay interest that is one-ninth of the amount that students will be asked to pay,” she complained. “That’s just wrong. It doesn’t reflect our values.” Warren derided the notion that “the banks get exceptionally low interest rates because the economy is still shaky and banks need access to cheap credit to continue the recovery,” adding, “our students are just as important to our recovery as our banks.”

What Warren is alluding to is the Federal Reserve Discount Window, which the Fed defines as “an instrument of monetary policy that allows eligible institutions to borrow money, usually on a short-term basis, to meet temporary shortages of liquidity caused by internal or external disruptions.” Warren may have been a professor in a past life, but even the most rabid deconstructionist is unlikely to associate an “institution” that has “temporary shortages of liquidity” with a typical college student.

But it is not confusion; it is misrepresentation. The Discount Window is an emergency measure used to prevent runs on banks; it is offered “short-term.” And these measures are typically very short-term: frequently, overnight.