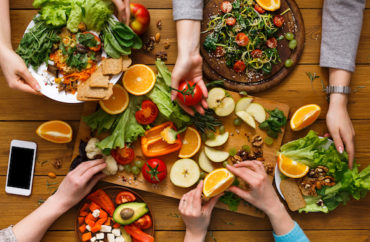 Just be sneaky about it!

The revelation that Cornell University has been sneaking mushrooms into its students’ hamburgers might shock some people: After all, it seems rather duplicitous for a school to trick grown men and women into eating vegetables when they think they’re getting meat. Is healthy eating such a critical task that schools should resort to deception in order to get their students to do it?

Well, Cornell’s answer seems to be: “Yes!” And if that’s the case, then why stop at mushroom hamburgers? There are plenty of ways to trick people into eating less meat and more vegetables. With a little creativity and a bit of luck, you can up students’ vegetable intake significantly. A few suggestions for any school that is looking to make its dining halls more eco-friendly, sustainable and health-conscious:

Celery hot dogs. Sure, if you replace hot dogs with celery sticks, some students might figure it out. But probably not many of them. If you stick some celery between a hot dug bun, slather it in mustard and relish, sprinkle some onions on top, and put it under a heat lamp, you can hardly tell the difference!

Beet meatballs. Everyone loves a good savory beef-and-pork meatball; they’re delicious, filling, and they probably remind many students of the warm comforts of home. Well, consider serving your student body meatballs made from beets—or, as we like to call them, beetballs! Throw some fennel, oregano, garlic and tomato sauce in there, and students will be lining up and saying, “Mama mia!”

Radish pepperoni pizza. There’s nothing like a good slice of dining hall pepperoni pizza. Unfortunately, pepperoni is no longer an acceptable pizza topping. Try radishes instead—slice them up, cover them with cheese, and nobody will be the wiser! Bonus points if you use soy-based mozzarella “cheese.”

Steak tartare made with chickpeas. Now, it’s unlikely your school’s dining hall offers an expensive, classy dish like steak tartar. Well, now it can! You just have to make it out of chickpeas. Traditional tartare is topped with a raw egg, but we encourage you to consider soy-based vegan egg substitutes.

MORE: Veganism a ‘white thing,’ not sympathetic to ‘victims of racism’