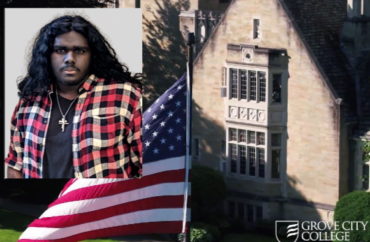 OPINION: The marketplace of ideas becomes soulless when we focus on what we’re not selling

Such a conservative campus is held up by some on the right as ideal, a university where we don’t have to hear from “woke, Marxist leftists” or take seriously the concerns of people on the left.

The problem with this utopian campus is a dearth of debate. It makes students less intellectually sharp, less worldly wise. It leaves students less adjusted to the unavoidably pluralistic real world, where we don’t get to curate the political leanings of our coworkers, friends and neighbors.

How do I know this? Because I go to a conservative college, and I’ve seen the effects of people trying to turn it into a right-wing echo chamber.

It’s also a decidedly pro-free speech college. Several weeks ago, my social psychology professor remarked that Grove City was “one of the few places I can actually teach what I think.” We’ve earned our nickname of “Freedom’s College” by promoting the pursuit of “objective truth” above “political, ideological, or philosophical agendas.” My college has functioned as a haven for free speech, and it’s a rare blessing.

And then one day, being conservative and pro-free speech wasn’t good enough.

In November 2021, an online petition surfaced that claimed Grove City was facing an infestation of critical race theory. CRT was “threatening the academic and spiritual foundations” of the school, the petition alleged, listing as evidence examples of personal interactions with campus staff, controversial statements from guest speakers, and the presence of Ibram X. Kendi books in a course specifically designed to explore alternate perspectives on race in modern culture.

The claims, in my opinion, were overblown. Yes, we’ve talked about critical race theory at Grove City College, and I am glad for it. As a conservative who has a deep concern about how we approach conversations about race, I’d rather learn about critical race theory at Grove City than most other colleges. Allowing debates about race to be commandeered by people who believe America’s moral and political foundations to be systemically racist is an inexcusable tactical error—conservatives need to talk about these issues, too.

I believe in the intellectual pluralism of the university: people with shared value systems can come to different conclusions and coexist within an academic institution. Obviously there are limits to this, particularly at a college like Grove City with Christian values. College is not an intellectual free-for-all or a marketplace of ideas where all ideas are equally valid, and I’ve never argued for such a premise. But defending the ability of students and faculty operating under the same set of values to disagree and discuss differing perspectives is key to the success of any university. Hindering that ability is intellectual handholding, and frankly insulting—it’s robbing students of the experience of learning to think, the whole premise of higher education.

As an emerging journalist with almost 100 national bylines under my belt, many of them on issues of higher education, I’ve come to understand the importance of covering campus controversies accurately and without hyperbole. Make no mistake, there are many instances of ideological excess at left-wing universities, and they’re not worth defending or minimizing. But, in covering the ravages of left-wing ideologues on campus, it’s important to remember people on the right have the same capacity.

Two weeks ago, I read the novel “The Journalist and the Murderer” by Janet Malcolm. The book chronicles writer Joe McGinnis’ relationship with Jeffrey MacDonald, an accused murderer who agreed to have his story published in a bid to fund his legal battle. The relationship between the two takes on an ethically complicated milieu as McGinnis becomes convinced of MacDonald’s guilt, but still seeks to persuade the accused murderer that the published book will aid in MacDonald’s release. Malcolm’s point throughout the narrative is simple—journalists’ desire to get clicks and exposure can easily erode our ability to effectively communicate the facts, and those of us working in the media sphere ought to be aware of this possibility.

This was evident in the headlines surrounding Grove City’s CRT kerfuffle. Grove City wasn’t being targeted by “woke interlopers.” There wasn’t a “fire within the citadel,” and we didn’t have “worrisome dark spots on our lymph nodes.” Grove City College is one of the last of a dying breed that has dared to stand for a traditional definition of free speech and uphold a degree of intellectual pluralism within its walls, even when it might be more financially beneficial in the short run to make sure students know precisely what to think about every controversial issue.

The results of the media debacle can be felt on campus. In April 2022, the Grove City College Board of Trustees published a report explicitly denouncing critical race theory in a way the school has never done with any other issue. It doesn’t specifically forbid certain pedagogies, but its list of recommendations sets a precedent for how to deal with non-Christian and non-conservative ideologies on the campus. I don’t know if there’s a better solution, but it highlights a question for conservative institutions going forward: if we’re not pro-CRT, how do we engage in the harder task of creating a positive ideological identity on controversial issues?

That’s not something any administrator can completely control, but it’s a vital step in maintaining a degree of intellectual pluralism within academic institutions. The marketplace of ideas is going to become very soulless if we become preoccupied with what we’re not selling.

Today, in the wake of the CRT controversy, I couldn’t tell you whether Grove City College is better for free speech or intellectual pluralism as a result. I have enough trust in our historic legacy and the dedication of our current administration to maintain cautious optimism, but I know that optimism isn’t shared by everyone, to say nothing of other institutions or the politically charged climate of higher education outside our walls.

I’m proud to attend a conservative, free-speech friendly college, but after watching the firestorm come and go, I now understand that intellectual pluralism is easy to destroy and hard to protect. Without it, America’s colleges are destined for a downgrade. We must defend it against all sides, even our own.