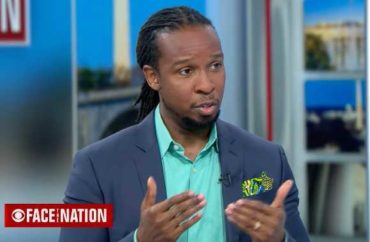 There are some who fight for ‘freedom to exploit, freedom to have guns,’ Kendi said

Kendi did not further elaborate or explain the connection between white supremacy or “the freedom to enslave” and gun ownership.

Pew Research Center polling data shows that while the percentage of gun ownership compared to the general population is highest among whites (36 percent of white Americans say they are gun owners), 24 percent of blacks and 15 percent of Hispanics also say they own a gun.

Kendi: We must teach our children to identify white supremacist ideology

Kendi described how parents can explain racism and white supremacy to their children and protect them from its effects. Despite protective measures, however, Kendi likens white supremacy to an inescapable danger like car traffic which can only be prudently managed, not challenged or entirely avoided.

One is a parenting book called “How to Raise an Antiracist,” and the other is a child’s book called “Goodnight Racism,” a play on the classic text “Goodnight Moon,” CBS reported.

“I want us to counteract that as parents,” he told the news outlet.