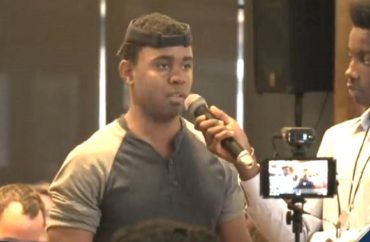 At Stanford University on Tuesday night, a black student enrolled at the institution stood up and denounced Black Lives Matter for several reasons — saying it is funded by white liberals and founded by three black lesbians and does not champion the need for strong black families with husbands and fathers as the role models.

The freshman made the comments during a “Make Stanford Great Again” event hosted by the College Republicans, which featured Turning Point USA’s Charlie Kirk and Candace Owens, the latter of whom is a black woman who has been thrust into the national spotlight in recent tweets by Kanye West and President Donald Trump that praise her for her I’m-not-a-victim message.

Emboldened by Owens, the student stood up during the Q&A and spoke about how he had researched Black Lives Matter and found it severely lacking when it comes to defending straight black men and discussing the need for black men to be strong fathers and husbands.

“I escaped the plantation, bro,” he continued. “I’m empowered. They don’t want me to have power. They want to keep me dependent. But I’m realizing this. They put white liberal ideas — LGBT, women, non-binary, white feminism, all that Hillary Clinton stuff — put it in black face!”

The energetic student received claps and high fives as he spoke. (Below is a portion of his comments on video. His entire time at the mic can be seen here).

After the event, Owens declared it a sign of a budding “Black Revolution.”

“The world is changing before our eyes,” she tweeted out. “Tonight at Stanford, a black student stepped to the mic. He said he used to support Black Lives Matter until he researched their lies. He shouted to a packed room ‘BUT NOW I’M FREE’. The Black Revolution is unfolding and it’s beautiful.”

The world is changing before our eyes. Tonight at Stanford, a black student stepped to the mic. He said he used to support Black Lives Matter until he researched their lies. He shouted to a packed room “BUT NOW I’M FREE”.
The Black Revolution is unfolding and it’s beautiful.

‘I am just trying to find truth’

In an exclusive telephone interview with The College Fix on Wednesday, the student — 20-year-old freshman Ebbie Banks — spoke about what inspired him to come to Turning Point’s event and speak up.

“I am just at a place right now where I am just trying to find truth,” he said. “To be honest, I am not either liberal or conservative — I am not even in the middle. I feel like both sides have partial truths, but not the whole truth. I am just trying to get as many different perspectives as I can. Engage in new ideas, explore new ideas.”

That desire can be traced back to what Banks calls the most traumatic experience so far in his young life. Growing up, he said he was pretty liberal. Then he was falsely accused of sexual assault, he said, and the “white liberals” who were supposed to support him and hear his side of the story instead turned their backs on him.

“The white liberals were very eager to demonize me and see me as a monster before they had all the facts,” Banks said. “The left only acknowledges certain kinds of victimhood … but then my trauma doesn’t get acknowledged and validated.”

He said the incident took place in the summer after his junior year in high school. He attended a theater camp that enrolled predominantly white students, and he was among a handful of black students there. He said he engaged in a consensual sexual act with a white female student, but soon after rumors spread that he assaulted her. He was never contacted by police or administrators, the entire affair was rumor-driven, he said.

“People were looking at me like I was a fucking monster, like I wasn’t human,” he told The Fix. “I cried every day for a month. I was depressed out of my mind. It just felt so unfair.”

“So for the longest time I wanted people to acknowledge what I had gone through, sympathize with my pain, but I realized no one on the left was going to validate my victimhood. … If I got stopped by the police I could talk about that with white liberals, but once you talk about being falsely accused, it’s a taboo subject. I felt that burden of suffering in silence … you just feel isolated.”

Eventually, Banks said he decided to let go of his anger over the incident.

“It wasn’t productive for me to always be stuck in my victimhood,” he said. “I can either stay in it and feel sorry for myself or empower myself and try to get my shit together.”

On Tuesday night, listening to Owens’ “be a victor and not a victim” message, it resonated strongly with Banks, he said, inspiring him to give the message that he did.

“I was a victim but I don’t need to obsess over it and have it control me and rule me and have it become who I am,” Banks said. “Candace was talking about not having a victim mentality — I really felt that.”

Banks said he isn’t ready to join the College Republicans just yet, but he does like to go to their events and hear things out. Meanwhile, he said he plans to attend left-of-center events as well and continue doing online research on issues that matter to him.

“I feel like conservatives don’t like to act like racism is a problem, but then again, white liberals like to act like false accusations are not a problem,” Banks said. “I’ve felt like even here at Stanford I’ve had trouble finding places where I can find support to help me overcome it.”

MORE: A student called me a rapist. Here’s the toll it took on my life.