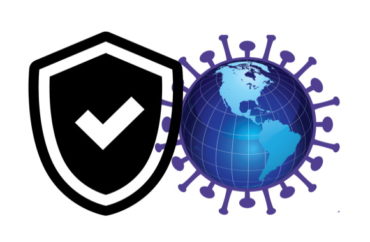 It was the week of March 13, 2020, when Professor Steven Templeton began to believe that society’s response to COVID would not be based on science, but on something else.

“I started to get a sense that fear was really going to drive the policy – the public was terrified,” he told The College Fix in a telephone interview.

In the year-and-a-half since that time, the associate professor of immunology and microbiology at Indiana University School of Medicine – Terre Haute has worked to sound the alarm on what he sees as the “collateral damage” from COVID policies.

Past pandemic planning commentaries from the WHO, the RAND Center for Domestic and International Health Security, and the Center for Biosecurity at the University of Pittsburgh Medical Center in Baltimore, Maryland, were generally dismissive of large scale lockdowns and school closures. Previous research on masks largely highlighted their ineffectiveness.

As an immunologist and microbiologist, Templeton knew all this.

When he was a graduate student at the University of Iowa around the time of the first SARS epidemic, he studied coronaviruses in mice. Following Hurricane Katrina, he worked for NIOSH, a branch of the CDC, looking at the impact of exposure to fungal pathogens on the lungs. In his current role, he continues to research the effects of opportunistic infections.

As a scientist with considerable knowledge of the immune system and microbial disease, Templeton had some sense of what a rational response to COVID-19 might look like. Given his background, he said he knew what he was seeing embraced by leaders and institutions wasn’t it.

Wanting to do his part to restore some calm and rationality, Templeton would eventually take on the roles of science writer and science communicator.

Today, Templeton’s main outlet for his writings is his Substack Fear of a Microbial Planet, which he launched in mid-September.

So far, he has tackled issues like masks, the risk of COVID to children, and infection vs. vaccination acquired immunity. 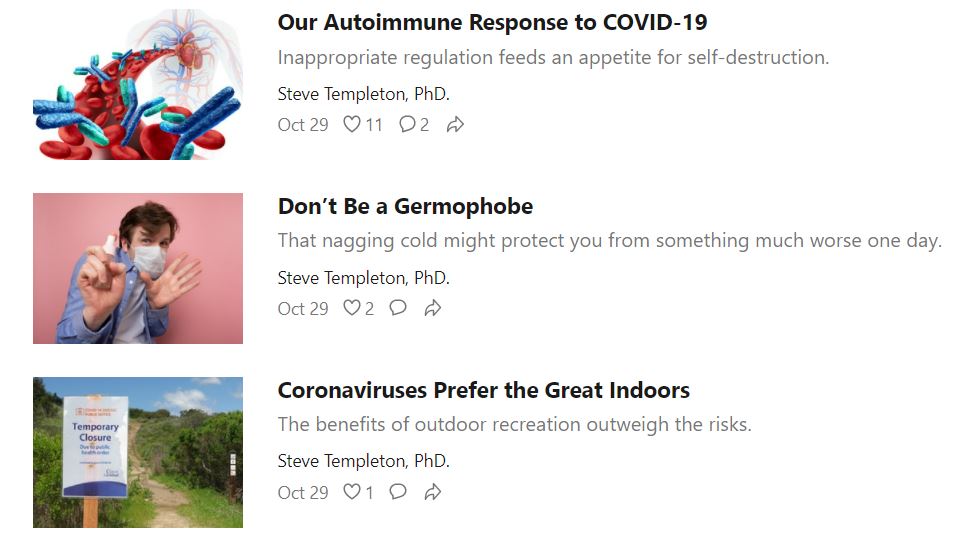 Templeton, in his interview with The College Fix, said initially his focus was on making a difference at the local level, but he understands he is filling a gap as his Substack enjoys a growing national audience.

At first, he was just writing to his local school board arguing against school shutdowns. Next, local newspapers took to interviewing him. That led to a series of articles for the local paper, including one Templeton said he is especially proud of: “The Price of Being Human.”

The October 2020 piece, Templeton said, “really pushed back against the idea that people who get infected, it’s their fault and they’ve done something wrong and that good behavior will prevent you from being infected.”

“…The governor of Indiana had come out and sort of blamed people in the state on the level of cases in the state. So I wrote about that and kind of pushed back…I said, ‘You know, there’s not a good way to prevent being infected based on the evidence that we have.’” 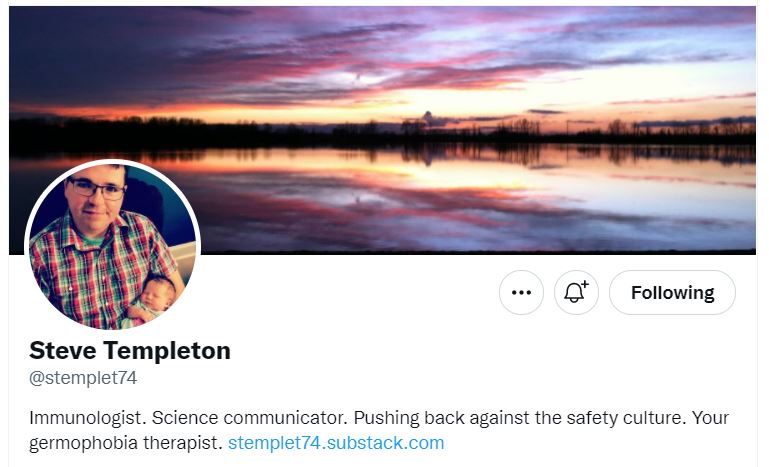 When asked for his overall assessment of how the pandemic has been handled, Templeton said: “The spread has not been contained. And we’ve done a lot of collateral damage on top of the damage that the virus itself has done.”

Two institutions that came up in The College Fix’s interview with Templeton that he believes may share some culpability for what has been wrought on our society are the CDC and universities.

Describing the CDC, Templeton said, “They’re not really a science-driven organization. I think if there’s anything that is science-based that doesn’t have a political component then that science will be a lot more accurate. But any time there is a political component, anytime there’s any kind of politics that has any chance of intervening, that politics will override anything else.”

He noted that the director of the CDC is a political appointee, not approved by the senate, and is answerable to the president, who is a politician.

“The very nature of the CDC is a political nature,” he said, adding that from his time working there he noticed “there’s a lot of political considerations in how they operated. … That’s something that can’t be denied.”

As for universities, Templeton acknowledged that they can be pretty orthodox places, sometimes governed by obsessions with the physical and emotional safety of their students to the detriment of their students and their communities.

Recounting the early days of the pandemic at his own institution, Templeton talked about how initially it appeared that some of his colleagues in microbiology and infectious diseases seemed to share some of his views.

But, Templeton said, “I think very quickly a lot of the faculty learned to just be quiet and not voice their concerns even if they had them. … Only at the beginning did I hear some protests. But it wasn’t very long before everybody else pretty much shut up.”

Furthermore, in Templeton’s opinion, the quick move of so many academic institutions to shut down likely only exacerbated people’s worst fears.

“I mean, I was in the middle of a course called ‘Host Defense’ for medical students and the whole school shut down,” Templeton recalled. “It went virtual in the middle of it. And I was trying to convince local people not to overreact and do things that might hurt the community and not actually make things safer…and all these universities shutting down and going virtual didn’t make that easier.”

Safety culture and fear of legal liability, according to Templeton, were likely contributing factors.

“The safety culture that we live in has kind of enabled some of these responses, especially in schools where, you know, education has taken kind of a back seat to the appearance of safety,” Templeton said. “I as a parent, not just a scientist, have problems with that.”

With regard to liability concerns, he commented, “I don’t know of any instances where [a] university has been sued because someone had contracted COVID through class…but I have heard of the fear of that being a driving force in setting [university] policy.”

As for how this all may end, Templeton provided several insights, largely focused on schools and universities, given his roles as a professor and a parent, while also offering thoughts on how things may play out on a national level.

Personally, he said, he would let people make their own decisions about which safety measures they do or don’t take, especially when the evidence is inconclusive, although he also admitted he knows universities and school boards don’t think that way.

One mitigation effort Templeton does believe would be reasonable in educational settings would be a policy called “test to stay,” which he said might be used to transition back to normal.

It is also one he has personally recommended to his local elementary and high school advisory board.

According to Templeton, this would be an alternative to quarantining students and entail having students exposed to people with a confirmed COVID case regularly submit to rapid testing for a limited period during which they may reasonably be believed to be contagious.

“Children are so low risk,” Templeton said, “that they shouldn’t be quarantined at all. So this is one way to get out of that.”

Additionally, he said he believes universities will need to let up on the behavioral restrictions imposed on their campuses.

“I think that college students are also at incredibly low risk and you can’t really control what they’re doing off-campus anyway,” he said. “So the whole idea of having them with all these strict restrictions when they’re in class…is not something you can sustain for years and years and have any kind of effect.”

“I think that’s going to vary on geographic location. But I think in the end, you know, everyone will eventually be back to normal because they see the places that go back to normal don’t have any more different outcomes than those that don’t – especially when we get closer to having the virus in the endemic state.”