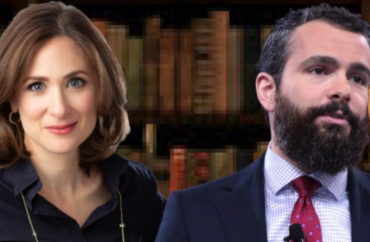 Abigail Shrier, journalist and author of “Irreversible Damage: The Transgender Craze Seducing Our Daughters,” denounced today’s cancel culture and pessimism as “not American” in a recent talk to Yale University students.

“This generation needs an injection of optimism,” she said during a webinar hosted by the William F. Buckley Jr. Program at Yale.

“They need to know that they can confront ideas they disagree with, too. They’ll be okay. But this whole cowering … is really quite pathetic, and it’s not American,” Shrier said.

Ryan Anderson, president of the Ethics and Public Policy Center and author of “When Harry Became Sally: Responding to the Transgender Moment,” echoed similar sentiments as a fellow speaker at the event, titled “Modern Day Book Burning: The New Digital Censorship.”

“Maybe we’re right, maybe we’re wrong. The only way that you’re gonna show us that we’re wrong, though, is by actually engaging the substance of the book. Not delisting us, that doesn’t persuade either of us,” Anderson said.

“If you’re gonna persuade people that we’re wrong, you actually have to make a substantive argument.”

Anderson’s and Shrier’s books were published in 2018 and 2020, respectively. Both critiqued the transgender movement and its effect on individuals, especially children.

The two authors criticized higher education in particular for its lack of intellectual diversity.

“The whole point of a liberal education is to liberate you from preconceived opinion. It would be liberating, this form of education, because you would hear lots of different viewpoints,” Anderson said.

“There’s something about the approach to modern day book burning in which it seems like, ‘Well, why would anyone wanna buy this book except for people who agree with it?’ There’s a vision of what books are all about, and what reading is about, and what education is about, that looks much more to me like indoctrination,” he said.

College campuses have been criticized in recent years for their lack of open political diversity. Conservative students in particular have complained about free speech violations and the perceived need to “self-censor” their opinions.

“The young people today need to take [this] back. They need to take back the ability to explore ideas and have friendship and conversation even with people they share nothing in common with,” Shrier said.

“It’s so important because it makes you better. It helps you argue better, it helps you realize what you know and what you believe. … So my hope is that somebody out there will be inspired to take that back,” she said.

Anderson also warned of the collapse of civil discourse and national unity.

“If you care about some modicum of civic unity, while we disagree about politics, we can’t politicize everything. So, like baseball, the American past time. … When we no longer have those common spaces, it’s really really bad for civic unity, because we need to be able to live together even as we disagree about these things,” he said.

“So my pitch to the big CEOs would be: you’re either gonna further divide us, or you’re gonna be one of those commonalities where we can come together,” Anderson said.

“We’re not as divided as we think,” she said.

“The problem is a tiny, tiny minority of extreme, far-left activists are able to use social media to shame and badger major companies. And we need to let go of some of the fear of losing our halo, because it’s a nonsense halo,” Shrier said. “You’re not virtuous because you banned a book; that’s an incredibly intolerant thing to do.”

She went on to criticize Big Tech’s obedience to cancel culture.

“Somehow, Amazon has it wrong, the idea that ‘Oh, if I get rid of that book, then the young people will like me.’ Well, the people leading this movement represent a tiny, tiny group. … They’re completely warping our discussion,” she said.

Both authors pointed out the extreme scale of the companies in question.

“Scale matters. Scale is the difference between homicide and genocide. It’s a big difference when it’s Target or Amazon … or your local bookshop [removing books],” Shrier said.

Shrier and Anderson said the reason their books are being blocked is because they defeat the left’s narrative.

“What is so dangerous about Abigail Shrier’s book?” Anderson asked. “It’s actually persuading people, it’s changing minds, it’s educating people. If it had no impact, then they would sell it; no one would care. It’s precisely that a book like hers is being read, and is being influential, that they’re afraid of it.”

Turning back to the issue of hyper-politicization, Anderson ended with a serious message for young conservatives.

Anderson’s book is currently available at Barnes & Noble. Shrier’s is available on Amazon.

The Buckley program did not respond to requests for comment from The College Fix about this event.