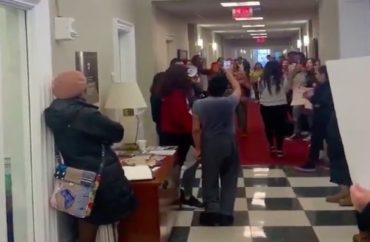 Students at Harvard University staged a protest this week demanding the creation of a new ethnic studies department, the second time in as many weeks that campus activists have “occupied” a building to spread their message.

This week, The Harvard Crimson reports, protesters once again occupied a campus building, this time the Office of Admissions and Financial Aid. Students reportedly protested with slogans such as “After you admit us don’t forget us” and “Want diversity? Teach our histories!”

The Crimson said one student “criticized Harvard for simultaneously ‘tokenizing’ students of color while denying them access to diverse curricula and faculty mentors.” That student declared at the event: “I am tired of Harvard using my story without giving me ethnic studies so I can fully understand what my story even means.”

At one point during the protest, Dean of the College Rakesh Khurana arrived in the admissions office and sat down in the hallway, taking notes as he watched the students chant.

Khurana said in an interview after the protest that he attended the sit-in to listen to students’ concerns.

“Everybody on our campus deserves to be heard,” he said. “And I’m trying to understand what is important to them and see what we can do to continually strengthen dialogue and communication with the students.”

Students who work for the admissions office also spoke at the protest, calling on Harvard to reaffirm its commitment to diversity beyond admitting students of color by also creating a formalized ethnic studies program.

The demands of the protesters have not gone unnoticed. Earlier this week Dean of the Faculty of Arts and Sciences Claudine Gay wrote in an email that the university has a “strong institutional commitment” to creating an ethnic studies program.

The Crimson reports that, at a “teach-in” following the protest, Crimson reporters were asked to leave and were verbally harassed by activists there. Some protesters “physically tried to block The Crimson from taking photographs,” as well.