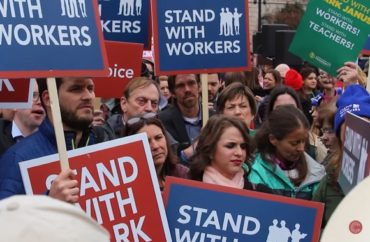 ‘If you’re doing a good job for the teachers, there shouldn’t be any problem,’ says bill sponsor

Indiana teachers unions are suing in federal court to block a new law that would make sure that teachers want to pay union dues before the schools deduct those funds from their paychecks.

Indiana is a right-to-work state, but some union members charge that it can be difficult to opt out of membership or dues deduction. Typically, there are narrow windows when dues payers can opt-out, and the unions do not publicize this option.

The recently passed law, Senate Enrolled Act 251, replaces these sometimes fuzzy union opt-out procedures with a clear three-step process that has to be repeated annually.

It effectively asks teachers every year, Are you sure you want to do this?

“Why are teachers being singled out for these onerous restrictions [when] no other union, no other charity, no other organization in the state has to do this to assign a portion of your wages to [them]?” he asked.

The union is claiming the law is unfair in singling out teachers unions and thus violates the teachers’ and the unions’ constitutional rights.

State Senator Phil Boots, a Republican from Crawfordsville, who authored the legislation thinks that criticism has it exactly backwards. He told the Star that his legislation was a “teachers’ rights bill.”

“If you’re doing a good job for the teachers, there shouldn’t be any problem,” Boots said while introducing the legislation in February. “No changes will take effect. Teachers will continue to join the union and have their dues deducted.”