Indiana University says it has “no plans” to remove a mural located on its campus that depicts members of the Ku Klux Klan amid requests the university strip the artwork from a lecture hall.

The university’s decision to leave the mural in place follows a petition created by a former student demanding the mural be removed from Woodburn Hall.

It is part of a 22-panel mural series painted by 20th century artist Thomas Hart Benton. The specific panel being sought for removal is titled “Parks, the Circus, the Klan, the Press” and includes a depiction of members of the Ku Klux Klan and a burning cross.

As of Thursday, the petition had collected more than 1,100 signatures — but officials at the Bloomington-based campus are unmoved.

“We currently have no plans to remove or move the mural,” Indiana University spokesman Ryan Piurek said in an email Thursday to The College Fix. 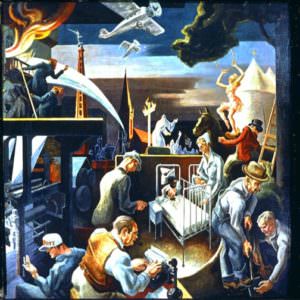 In a general statement on the matter provided to The College Fix, administrators have also said that mural (pictured) and many others at the public institution “serve as a reminder and testimonial to an unsavory and criminal portion of Indiana’s history.”

The demand for the mural’s removal comes as many colleges across the country ditch any relics of the Confederacy after protesters decried them as monuments to white supremacy.

Other universities have recently censored artwork deemed unsavory. Earlier this month, Yale University announced it will take down a stone carving of an armed Puritan and Native American flanking each other after some interpreted it as representing “colonial violence.” The University of Wisconsin Stout last year relocated paintings depicting interactions between settlers and Native Americans, saying they might cause harm to viewers.

As for the controversial mural at Indiana University, it was originally painted for the 1933 Chicago World’s Fair, and the mural series was installed at Indiana University in 1941. The paintings depict the “social and industrial history of Indiana from Native American mound builders to the industrialized age,” according to a university webpage.

An educational video filmed in 2012 by Indiana University explains the mural series was commissioned by Indiana state officials for an “Indiana Hall” at the 1933 World’s Fair and that Benton included the images of the Ku Klux Klan to “show all aspects” of the state’s history.

In the university’s statement on that matter, officials say that “Through much discussion, analysis and reflection over many years, Indiana University has consistently concluded that education is the best response to concerns over the Benton Murals.”

“The mural does not mark a time in history of Indiana because it is still extremely relevant today,” the petition declares.

It alleges the presence of the mural breaches the university’s diversity statement and “violates the student rights and code of ethics” by making students of color take classes in “an environment that promotes a group known for discriminating against people of color” and other marginalized groups.

In an email to The College Fix, Barrie, 32, said she was unaware of the mural as a student and learned about it from a Facebook post. She said that led her to create the petition after completing research on the topic.

“I was really bothered by the fact that the controversy surrounding it has gone somewhat unnoticed by the majority of students, myself included,” she said.

Barrie said her petition is separate from the recent calls to purge Confederate monuments amid the fallout of the white nationalist rally held last month in Charlottesville, Virginia.

However, she said “the events at Charlottesville have shown us what can happen on a college campus where hidden white supremacy exists.”

She said she understands the historical context of the Benton mural but added “a classroom is an inappropriate place for it.” In an update to her petition, Barrie said she wants the artwork moved to a museum.

In its statement, the university acknowledged the mural stirs discomfort for some students and “might affect their ability to study and focus,” but emphasized its commitment to creating a safe and inclusive environment.

Barrie took issue with those comments, saying they send “mixed signals” from the university administration.

“My response is this, a university cannot say that they strive for an inclusive environment and a learning environment that supports everyone while also acknowledging that the mural can have a negative impact on students that can effect their ability to focus and learn,” she said.

Barrie said some IU professors and students have reached out to her in support of her efforts. It’s unclear how many current IU students have added their name to her petition. The university’s NAACP chapter told The Fix it currently doesn’t have a comment on the matter.