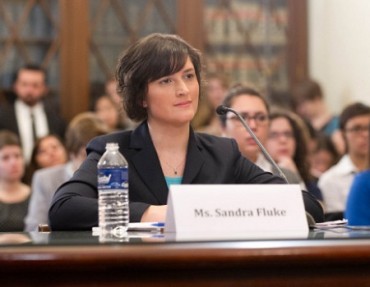 Steven Landsburg, the professor who was denounced by his university for criticizing Georgetown Law student Sandra Fluke, stuck to his position in an exclusive interview with The College Fix.

“Everyone deserves respect, but some people are not interested in discussing their ideas, or possibly examining a different side,” said Landsburg, a bestselling author and professor of economics at the University of Rochester. “Fluke clearly has no desire to do this.”

Fluke, an advocate for mandatory insurance coverage of birth control, was called a “slut” by Rush Limbaugh. On his blog, The Big Questions, Landsburg wrote: “While Ms. Fluke herself deserves the same basic respect we owe to any human being, her position… deserves none whatsoever. It deserves only to be ridiculed, mocked and jeered… I expect there are respectable arguments for subsidizing contraception, but Ms. Fluke has made no such argument.”

His opinion sparked controversy at the University of Rochester. Student protesters entered Landsburg’s mid-afternoon lecture and formed a line, shoulder-to-shoulder, between him and the class. Landsburg continued to lecture. The students distributed fliers that read: “We denounce professor Steven Landsburg’s attempt to smear a gender with derogatory terms.”

UR president Joel Seligman wrote an e-mail to faculty and staff that said he was “outraged that any professor would demean a student in this fashion.”

Landsburg found these criticisms to be absurd.

“Free speech isn’t the issue here,” he said. “Nobody, myself included, tried to stifle her speech.”

In fact, if anyone had stifled speech, it was the student protesters.

“I’m very disappointed in the growing trend of students and others unwilling to engage in meaningful discussion,” he said.

Regardless of political views, the ability to explore one’s opinions and engage opposition is important, he said—noting that this was why he became a professor in the first place.

“That’s what we’re here for, to share ideas and to figure out when we’re wrong and when we’re right,” he said.

As for the policy issue itself, he said the debate wasn’t about birth control—it was about whether anyone should be forced to pay for it.

“When the issue is about you paying for the lifestyle of someone else, this is the question we must be asking,” he said.

Landsburg worried that the contraception debate would distract from other issues during the election.

“Year after year we see that voters’ priorities are all wrong, and this issue will be no different,” he said.

Instead, he is focused on policies that largely affect the poor and the economy.

“I’m concerned with free trade, immigration laws, and tax policy—these are the topics that actually affect people, and not just a small, vocal minority,” he said.

Unsurprisingly, Landsburg was less than enthusiastic about Fluke running for political office—a possibility raised by Fluke during a panel discussion last week.

“She’s not interested in ideas and the motivations behind them,” said Landsburg. “But I guess that’s fitting, because those kinds of people end up in politics anyway.”

Fix Contributor Elaina Plott is a freshman at Yale University.