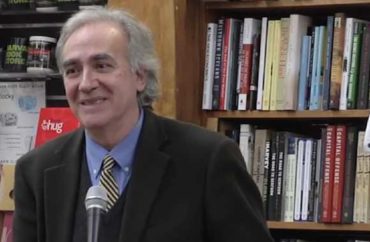 Carlos Eire, a religious studies scholar, historian and memoirist, received his Ph.D. from Yale in 1978 and has been a professor at the university since 1996. He has written and taught on a range of religious and cultural subjects, including the Protestant Reformation and the history of piety. Eire authored five books about history and religion and two memoirs.

Eire (pictured) was born in Havana in 1950 and was one of 14,000 unaccompanied children airlifted out of Cuba in 1962 by Operation Pedro Pan, according to Simon & Schuster. All of his books are banned in Cuba.

Eire participated in June 2022 in a panel on free speech and universities at Yale, sponsored by The William F. Buckley Jr. Program.

The College Fix connected with him after the panel to discuss the leftist control of the humanities. (The following interview has been edited for length and clarity.)

The College Fix: It was good to see you at the Buckley event, and I appreciate your support for heterodox thinkers on campus. You mentioned that more than 70 older [arts and sciences] faculty members retired at the end of the 2021-22 academic year. Why was that? Does it have something to do with how pedagogy and scholarship have changed?

Carlos Eire: We were all encouraged to retire. They wanted to clean house. After the plague [COVID-19] began, us older ones were offered a retirement bonus. … They were not really good offers. The subject areas covered by many of those professors who retired will not be replaced. The subject areas can get reshuffled. And in the reshuffling, for instance, Yale might end up without a Shakespeare expert or a British historian.

TCF: You also mentioned that the job descriptions for new faculty openings emphasize race, class and gender. Why do you think these areas of study have taken on such exaggerated importance relative to others such as aesthetics, rhetoric, psychology, or philosophical ideas? There are so many things that humanities professors can study. Why the race/class/gender industry?

CE: It comes from Marxism. It’s a logical extension of the class struggle. “Race” is a marker of exploitation. It’s stealth Marxism. They will deny being Marxists. Politics has become a lot like religion. To have lots of friends in academia, you need to be liberal or progressive. Many academics are genuine believers in stealth Marxism, even if they’re not consciously aware of it. Some are zealots. And, as is the case with religious zealots, they will declare you a heretic for a single “error.”

CE: There are two things going on. One is self-selection. People who are conservative, who perceive that this is going on in academia, tend not to choose academia as a profession because they don’t want to play that game – they will be made uncomfortable or rooted out.

The reason that [postmodern literary theorists] Lacan, Derrida and that whole gang are in is because you cannot get a Ph.D. without constantly quoting these people or referring to them. You can’t get a job. We had a search [for medieval religious history]. As is the case with many faculty searches, ideological zealotry plays a part in the hiring. And the job candidates knew this, or were themselves zealots, so they filled their lectures with references to these demigods.

[The second reason is] control exerted by the faculty who do the hiring and the admissions. Someone who doesn’t quote the correct people or talk on the correct subjects won’t get a job.

They will ax candidates who don’t have the right approach. I saw someone denied a job at a very high level because someone in the philosophy department argued that this person depended way too much on St. Augustine. But in fact, he was an expert of Augustine’s ethics.

If you have different views, you just don’t reveal yourself. I served for ten years on the publications committee for Yale University Press. I saw so many books that had even a slight conservative bent being axed by the outside readers who referee the manuscripts. Fortunately, the Press overlooked most of those biased readers’ reports.

TCF: By now, Eire said, academics are so left-wing, they’re swimming in it.

“A fish doesn’t realize that there’s something above the water,” he said.

Editor’s note: This article has been updated to clarify some comments.