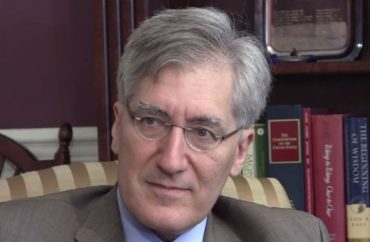 Instructor argues: ‘We need the courage to speak the truth’

Robert George, a professor at both Princeton and Harvard, recently sat down with The College Fix for an interview on the state of modern academia and the need for intellectual diversity and ideological tolerance in higher education.

George is a member of Heterodox Academy, an association of over 1,800 professors and graduate students that advocate increased viewpoint diversity on college campuses. Heterodox Academy’s mission statement holds that “university life requires that people with diverse viewpoints and perspectives encounter each other in an environment where they feel free to speak up and challenge each other.”

Heterodox recently held an “Open Mind Conference” which aimed to “discuss viewpoint diversity and open inquiry in the academy.” George appeared on a panel there in which several professors discussed “what professors can do to make a difference in the classroom.” In an interview with Fix reporter Matthew Stein, George expanded on the ideas of the panel.

The College Fix: In your Open Minds Conference panel, you mentioned that you don’t think professors should “use their classrooms as a soapbox for advocacy,” and that you and professors like Cornel West make your classrooms as intellectually stimulating and valuable as possible by honestly portraying both sides of an argument. This seems to hit on a big issue with the universities today, as many professors of the “progressive orthodoxy” you later mentioned seem to use their positions to influence their students into becoming activists of related social causes. How do you think society can address this issue, particularly given the system of tenure and the sheer magnitude of the problem?

Robert George: Like most of the problems in academia—and society more broadly—today, what is needed above all is courage. We need the courage to speak the truth even when it is uncomfortable, and even when truth-speaking carries risks. Professors who seek to indoctrinate their students are betraying a sacred trust. They are supposed to be educators. If there is an antonym to “educating,” it’s “indoctrinating.” Professors (and other teachers) who engage in indoctrination need to be confronted. Certainly administrators need to do this. Fellow faculty members need to do it. And students themselves need to do it, too.

Is this risky, especially for students? You bet it is. But that’s where the virtue of courage comes in. All of us—including students—need to muster the courage to call out teachers who betray their sacred trust. In addition, professors who understand the importance of truly educating students, and who grasp the fundamental difference between education and indoctrination, need to set an excellent example for their colleagues—especially younger colleagues. Together, we can establish a milieu that powerfully discourages indoctrination.

CF: You also mentioned that you should create an atmosphere of “unsettling” each other in the classroom. Looking at the campus more generally, there are continually accounts of the opposite atmosphere in regards to discussing “unsettling ideas,” whether it be by an outside speaker being shut down or students on campus being afraid to express unpopular viewpoints. How can this negative general atmosphere on campus be improved to encourage students to act out the ideal intellectual atmosphere that you described?

RG: Again, courage is the key. Students must have the courage to express dissent—even if they are alone or in a small minority in the class in holding a particular view. And faculty members need to model courage for their students—and for their colleagues (especially younger colleagues). All of us must overcome the natural fear we feel in oppressive environments of the sort that too often exist today in college, high school, and even middle school classrooms. And when a dissenter does speak up in defiance of a campus dogma, all of us (and not only those who happen to share his or her dissenting opinion) need swiftly to provide that individual with support.

That is how we will establish an environment in which people are free—and feel and know they are free—to speak their minds, thus benefiting the entire community by contributing to robust, civil campus debates.

CF: Identity politics was one issue you touched on in the Q&A, which you said has a negative effect on both college campuses and society at large. Could you speak a little more on how identity politics and student groups organized around group identity has negatively affected the university? Are there any common issues of identity politics amongst the faculty? Has it had any effects on your or other professors’ ability to create the positive intellectual atmosphere you previously mentioned?

RG: Identity politics, and the dogmas of the phenomenon that has come to be known as “intersectionality,” harm learning environments by encouraging groupthink and stigmatizing dissent.

I find this reprehensible. People need to think for themselves. And they need to do that, and need to know that they are entitled to do that, whether they are male or female, black, white, green, blue, or purple.

CF: Concerning your comment about listening versus protesting, where do you think students get these attitudes that they are unwilling to hear viewpoints with which they disagree, and why do you think Liberty University students do not share this attitude?

RG: I’ve been critical of Liberty University president Jerry Falwell, Jr. on a number of grounds. But let’s give credit where it is due. He and his administration and faculty invited Bernie Sanders to Liberty and encouraged—even demanded—that students listen to him thoughtfully and treat him with respect. My sense is that there are lots of other universities where administrators and faculty members are part of the problem, not the solution. Far from encouraging students to listen and try to learn from outside speakers who question campus orthodoxies, they discourage students from doing that.

This much is certainly true, far too few faculty members are saying to their students: “Listen and try to learn from speakers with whom you disagree. And you can’t very well listen and learn while you are protesting. Genuine listening—listening with a view to learning–requires certain virtues: openness of mind, a recognition of one’s own fallibility and the possibility that one is wrong, a love of truth even above one’s most cherished opinions.”

At the Open Minds conference, Wesleyan University’s president, Michael Roth, whom I admire, told the story of students protesting Antonin Scalia when he visited the Wesleyan campus. He said that he himself would have been among the protestors, had he not had the obligation to welcome Justice Scalia to the campus and introduce him. Well, to me this was not President Roth’s finest moment. Scalia was a brilliant jurist and someone who loved to engage others in robust discussions of controversial questions. Students should have been listening to him—considering his arguments, thinking about possible lines of counterargument, weighing the reasons and arguments on the competing sides—not protesting him.

Yes, the right of protest, including on campus, is sacrosanct. But it’s stupid to protest serious people with whom one disagrees, rather than listening to them, thoughtfully engaging with them, and trying to learn from the discussion.

CF: On a similar token, one thing I’ve thought about is the lack of respect on campuses among both students and faculty in the modern day. It’s relatively common to have professors cursing in their classrooms and addressing topics that are in my opinion undignified (such as the classic pornographic art project that is graded highly by the professor). Students also seem to have a lack of respect for an authority position (like Scalia for the sake of his judgeship or a distinguished professor and academic) when they come to speak if they do not share their views. Do you think the notion that campuses have become less distinguished is accurate, and if so, how do you think it plays into the protest versus learning dichotomy you mentioned with outside speakers?

RG: Civility—and decorum—in the classroom is important. Unless there is a truly valid pedagogical reason to utter, say, a word used as a racial epithet or an obscene word, it shouldn’t be done. Such things undermine the mutual respect that is a precondition of robust, fruitful debate when it comes to sensitive issues on which people have passionate differences of opinion. It is not “self-censorship” to decline to use a slur or call someone a vile name. It is decency and good manners. It is self-censorship when one declines to express an opinion one holds, especially an informed opinion, for fear that it will upset or annoy people who won’t appreciate having their own opinions challenged.

As I so often say, there is a proper currency of intellectual discourse. That currency consists of evidence, reasons, and arguments. It is critically important, especially in an academic setting, for business to be done in the proper currency.