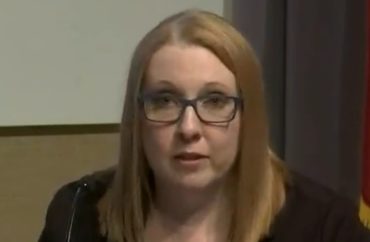 Last week, Iowa State University backed down from its plan to investigate and possibly punish the College Republicans chapter for a tweet that encouraged gun purchasing in anticipation of Joe Biden’s election and possible gun control measures.

“Everyone, you must arm up, expect these people to attempt to destroy your life, the elites want revenge on us,” the College Republicans tweeted on November 7. Ryan Hurley, Iowa State College Republican president told The College Fix that the tweet did not intend to promote violence.

Now, university officials have written a response to an “open letter” that called for disciplinary action against the conservative student group.

The open letter, created by journalism Professor Kelly Winfrey (pictured), called for “removal of recognition as an official student organization” until every “remaining current student member from the roster has graduated from the University.”

Another journalism professor, Novotny Lawrence, and an academic adviser for the journalism school, Kelsi Poe, signed onto the demand to restrict free speech. In total, over 500 people signed the letter, primarily a mixture of professors, students and alumni.

We are appalled that the Iowa State University administration has decided it will not invoke disciplinary action on a student organization, the Iowa State University College Republicans (@IStateCRs), for a tweet that, having nothing to do with the political nature of the organization, incites violence and creates a campus climate that feels threatening to and isolates students, faculty, and staff of marginalized and historically oppressed populations.

Privileging the free speech of those causing harm over the safety of the historically marginalized members of our community furthers the damage and sends the message that the Iowa State University community does not value their presence, despite numerous condemnations in recent months of this exact kind of behavior. It is clear that the administration’s statements during a summer that served as a referendum on racism in this country, were merely symbolic and they now serve as further evidence of its history of denouncing some harmful behaviors, only to abdicate themselves of responsibility when given the opportunity to show their commitment through action.

The signers also want an updated student conduct code to address responses “to speech by students and student organizations that promote hate, directly or indirectly threaten the physical safety and free movement of members of the campus community,” or could “potentially incite violence, or violates the Principles of Community.”

Finally, it wants “the Provost to begin working with academic units on campus to increase the University-wide U.S. diversity requirement and review the approved courses to ensure the course content is centered on diversity issues.”

However, the university administrators were not going to cave to the demands.

“At the core of this demand [derecognition of the College Republicans] is a disconnect between the law and First Amendment freedoms guaranteed by our Constitution,” the administrators said. They explained how the First Amendment worked and concluded, “this demand asks that the university proactively violate the law, and we will not do so.”

It corrected Winfrey for falsely claiming that student group tweets were not “protected speech if they violate university policy.”

The administration explained to the journalism professor:

The tweets that are the focus of this demand are protected speech, and standing alone,
they do not violate university policy. The university cannot, and will not, punish students or student organizations for their constitutionally protected expression.

Student codes of conduct at other universities that have attempted to punish students for
speech deemed “hateful,” “derogatory,” “threatening,” “insensitive” or described with
other such terms have consistently been struck down as unconstitutional. Moreover, the
university cannot establish its own thresholds for threatening or hateful speech that are
broader than the limited exceptions currently allowed in federal law

Finally, it responded to her demand for a diversity audit, pointing out to her that the faculty senate is already working on a curriculum review.

“The Working Group has prepared a report which includes new, contemporary learning outcomes, and a draft process for the review and approval of courses that will meet the diversity course requirement,” the administration said.

Read the open letter and read the full university response.