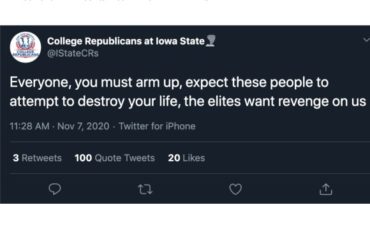 Iowa State University officials backed down from its condemnation and potential investigation of its College Republicans chapter after the swift intervention of the Foundation for Individual Rights in Education.

The free-speech group sent a letter to the administration on November 9 after the university condemned a tweet from the College Republicans which encouraged people to buy guns in the anticipation of Joe Biden being elected president.

The tweet on Saturday, November 7 said: “Everyone, you must arm up, expect these people to attempt to destroy your life, the elites want revenge on us.”

The foundation reminded the administrators of its obligations under the First Amendment.

The tweet “does not on its face or in context indicate that the group intends to engage in any form of violence,” FIRE told the university.

It is, at most, a call to acquire firearms or other weapons, not a threat to use firearms in an unlawful manner. Further, the context of the statement, made soon after the outcome of a contentious presidential election to an unspecified online audience, demonstrates that is precisely the sort of political hyperbole that remains protected by the First Amendment.

University leaders are aware of the activity on the account and are taking steps to address conduct that violates university policy. Clearly, any offensive language/actions of these individuals do not reflect the values we hold at #IowaState

Another statement from the school said:

Any suggestion of armed activity by an Iowa State student organization is prohibited by university policy. Any conduct that violates university policy will be addressed in an appropriate manner.

“Any conduct in violation of these policies will be addressed under the student code of conduct,” Angela Hunt, a spokesperson for the university, told The College Fix via email. She confirmed that “[n]o students were subject to discipline by the university” for the tweet. “This distinction was communicated with the student organization,” Hunt said.

The threat did not even spook the university’s police department.

“At this point, I get why it might be a little alarming for some to read,” officer Kaitlyn Boor said, according to student paper the Iowa State Daily. “But they do have that right to kind of post what they want to…it’s not too alarming.” Boor said she would report the tweet to her supervisor.

“The school reached out and said they would not be punishing anyone in the club,” Iowa State College Republicans President Ryan Hurley told The Fix via a phone interview on Wednesday.

Hurley complimented the campus police department. The club turned over death threats it received via Twitter to the police, Hurley told The Fix.

“I can tell you that our club does not have any violent intent,” Hurley said. “The meaning behind the tweet is that if Joe Biden is elected, there’s going to be a lot of bans on guns sales, a lot to that effect, so it’s best to get weaponry now.”

He said he is now battling an attempt to remove him from his position as a student government senator.

Hurley represents the Inter-Residence Hall Association as its senator. The school’s counsel informed the association that it was wrong to claim Hurley had violated university policy, according to a letter reviewed by The Fix.

“To be clear, the offensive tweet alone violates no university policy, and the university has not taken any disciplinary action,” said Michael Norton, the university’s counsel.

MORE: Hundreds of students protest after school posted a photo of a College Republican