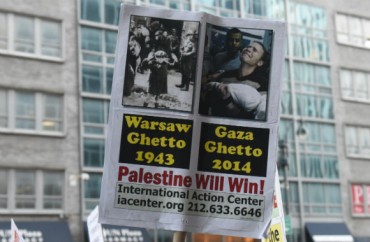 Antiwar and pro-Palestine activists tried to shut down a lecture by an Israeli ethicist of war at the University of Minnesota last week, according to a law professor who attended the lecture.

Though the school quickly denounced the heckler’s veto by protesters, its recent history has been plagued by similar attacks on events with controversial themes, constitutional scholar Carpenter told The College Fix in a phone interview. Carpenter wrote in his post that Halbertal’s lecture was titled “Protecting Civilians: Moral Challenges of Asymmetric Warfare.” The visiting scholar was about to start speaking “before about 100 students and faculty” when he was verbally attacked by about two dozen protesters, Carpenter said.

The lecture was delayed half an hour “as one by one the protesters stood up to shout denunciations of Israel and were escorted from the hall by university police,” including one who “came screaming back inside,” Carpenter wrote.

It was “difficult to hear Halbertal, much less to concentrate on what he was saying,” because protesters continued chanting outside the hall, Carpenter said.

Carpenter told The Fix this lecture is a prestigious event that has attracted notable names in the past, including Cass Sunstein, a Harvard law professor and former member of the Obama administration.

Don’t use ‘our tax dollars to promote war crimes’

The protest was apparently organized by an outside group based in Minneapolis called the Anti-War Committee.

In a Facebook post ahead of Halbertal’s lecture, the group invited like-minded peers to protest his talk outside the law school.

It said his military code of ethics “guides the conduct of the Israeli Defense Force [IDF] during its bombing campaigns in Gaza, the rounding up of Palestinians for detention without charge, and the military occupation of Palestine. … Join us for a protest to denounce Halbertal’s alleged expertise on ethics and to demand the U of M not use our tax dollars to promote war crimes.”

The Anti-War Committee said the protest was “endorsed by” the UMinn chapter of Students for Justice in Palestine (SJP).

In a post a day after its protest, the group asked supporters to make “tax-deductible donations” to further its work “to challenge US militarism and warfare from Palestine to Afghanistan!”

Nora Abdelal, an officer in the campus SJP chapter, confirmed to The Fix in an email that her group “sponsored the event because as UMN students we were hugely disappointed to see our institution hosting this speaker with thousands of dollars that could have been used to improve our campus.”

Halbertal “justifies the killing of thousands of Palestinian civilians … supports mass murder of civilians in Gaza” by the IDF, and his authorship of the military ethics code “is not an accomplishment but rather an insult to humankind,” Abdelal said.

She said SJP’s members and supporters “were encouraged to be present and stand up for what they believe in.”

It’s just the latest incident at UMinn where activists have tried to shut down viewpoints with which they disagree.

Carpenter told The Fix that last year a group of Muslim students protested flyers used to promote a panel discussion on free speech following the Charlie Hebdo massacre, because they included a depiction of the Prophet Muhammad.

As a result the university’s Office of Equal Opportunity and Affirmative Action launched an investigation into the professors who organized the event, eventually asking the dean of the College of Liberal Arts, which sponsored the panel, to condemn those professors. He refused, according to Carpenter. Carpenter also pointed to a group of community members, including professors, who tried to get former Secretary of State Condoleezza Rice disinvited from speaking because of her role in the Bush administration and the war on terror. Nearly 200 professors signed a letter saying the annual civil-rights lecture wasn’t the place for Rice to speak, MinnPost reported.

David Wippman, the dean of the law school, denounced the protests as an infringement on free speech and the exchange of ideas.

It’s “regrettable” the protesters did not take the opportunity to learn from other ideas, but they actively sought “to deny other students and community members their own opportunity to hear an invited guest speak,” Wippman wrote in a message to the law school community.

“Values of free speech and academic freedom are central to the University’s mission; we disregard them at our peril,” he said. The campus police “handled the situation with great professionalism and restraint,” he said.

Halbertal, the military ethicist, did not respond to a request for comment.