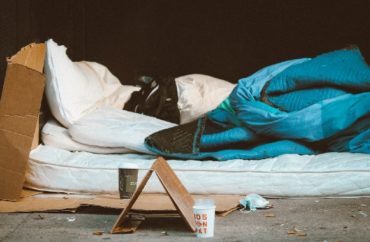 Yale students and New Haven city workers committed “violence” against homeless people who had set up an encampment alongside the city’s West River, according to student leaders.

Students with the FOCUS orientation program at Yale were instructed on August 24 to “throw away clothing and tents belonging to people living in a homeless encampment,” by a New Haven Department of Parks and Trees employee, according to the Yale Daily News.

“This sort of violence — ‘cleaning up after the cops’ and theft of unhoused people’s homes and belongings — is antithetical to the values of FOCUS,” Giuliana Duron, Sean Pergola and Fi Schroth-Douma, student leaders in the pre-orientation program, told the campus newspaper.

“The fact that FOCUS members were told to participate in this violence speaks to the gap between the ideals we hold and the work we actually do,” they wrote. “One thing is clear: FOCUS needs to change.”

FOCUS responded with apologies and further action. “Following the incident, FOCUS canceled their collaboration with the site — which was meant to last until Aug. 26 — and gathered the program’s leaders for a conversation,” the campus newspaper reported. “In their immediate response to the incident, FOCUS program leaders consulted with a harm reduction organization to make a list of material resources that might benefit people living at the West River.”

Others have raised concerns about homelessness in the city.

Librarian Maureen Sullivan spoke to a group of cops on August 24 to “raise a concern she has about used needles, fecal matter, and people regularly sleeping outside of the Wilson branch library in the Hill,” according to a report in the New Haven Independent.

“The city has a serious problem with unhoused people,” Sullivan told a police officer at a coffee with cops event. “You find fecal matter, used needles.”

The city also ordered a homeless camp cleared in 2019 along with resources to move people into shelters and get back on their feet. One man who spoke to the New Haven Independent said he did not want to go into a shelter because it had rules, like being back inside by a certain time each day.

“I don’t want to lose my bicycle,” Joe Jadach told the local news outlet. ​”I don’t like the idea of having to be back and inside a shelter everyday by four in the afternoon. I’m used to this.”