Look at hospitalizations and deaths, not just ‘cases’

Amid panic around the reported spike in novel coronavirus infections at U.S. colleges, a Brown University epidemiologist is asking the public to take a closer look at the data.

Andrew Bostom, who has periodically published updates of reported COVID-19 statistics from campus testing, argues that hospitalization and mortality rates don’t back up the portrayal of a worsening pandemic.

The perception that college students mingling with each other is a public health crisis is an optical illusion, Bostom told The College Fix in a discussion of how hard data related to the virus are often misconstrued.

But Bostom also has his suspicions about the reliability of the data from certain sources, especially the RT-PCR tests being used on a mass scale.

Over the weekend he touted validation from Portugal, where a court ruled that the tests are “unable to determine, beyond reasonable doubt, that a positive result corresponds, in fact, to the infection of a person by the SARS-CoV-2 virus,” which causes COVID-19.

It’s telling that universities don’t mention hospitalizations and use overly sensitive tests that mark even the “asymptomatic” as positive, Bostom said in a phone interview. Media outlets are quick to credit COVID-19 as the cause of death for people who once tested positive for the virus, even when there is no clear correlation between the two, he added.

The epidemiologist’s most recent COVID-19 tracking report on Twitter Nov. 23 looked at 100 American colleges, with case count, hospitalizations and deaths for each.

To conduct his research on the 100 colleges, Bostom said he underwent the “tedious” work of “Google searching” and relying on “local newspapers,” since college websites tend to hide this information.

He tallied 139,000 reported cases, which include tests that identified non-infectious fragments of viral RNA.

Ninety-two of the 100 schools reported no deaths or hospitalizations, though, and the other eight reported 17 hospitalizations together. Only the University of Dayton reported a COVID-19 death, according to Bostom’s tally.

For the University of Michigan’s Ann Arbor flagship, the scare of more than 2,500 positive tests prompted the university to kick students off campus, “forcing thousands of students to stay home or find off-campus housing,” according to The New York Times.

Bostom’s list has the University of Michigan at 2,264 total positive tests, but no deaths or trips to the ER.

His skepticism of the testing regime is not new.

Three months ago, the Times reported on the worry among public health experts at elite universities that the “cycle thresholds” for the tests are too high to be consistently accurate. The article title: “Your Coronavirus Test is Positive. Maybe it Shouldn’t Be.”

“I’m shocked that people would think that 40 could represent a positive,” University of California-Berkeley virologist Juliet Morrison told the newspaper, referring to a common threshold for test cycles. (Forty cycles is also the limit recommended by the CDC.) 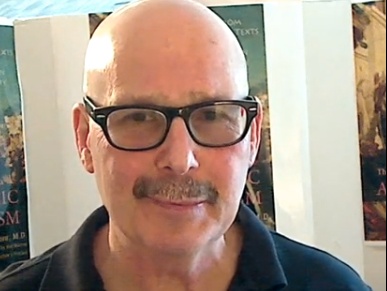 Bostom (left) echoed that sentiment to The Fix. There’s a big difference between, say, a 12-cycle identification versus a 38-cycle positive test, “which most universities use,” Bostom claimed, citing an example given to him by the Broad Institute, a major testing site in Massachusetts.

It’s troubling to him that more than 100 Northeast colleges have outsourced their testing to the Broad Institute, giving it unquestioned authority for coronavirus tests.

In India, where poverty is high and resources are scarce compared to the United States, medical professionals “don’t even deal with people that take over 25 cycles to test positive,” Bostom said.

The point is that students who receive positive tests, and their parents, “should be demanding the cycle threshold that they were tested positive,” he asserted: But “they’re simply not doing this,” instead taking the test results of unknown methodology at face value even if the students show no symptoms of infection.

Bostom is also troubled by new practices for authoring official death certificates administered by the CDC.

If someone tests positive at some point in time, and then they die in the future, that person’s death is often marked by the media as a result of COVID-19, he said. That’s due to the “dubious medical evidence” that now guides the authoring of death certificates, Bostom said, but didn’t respond to a Fix request for documentation of this practice.

Autopsies often sing a different song, however. The problem is that autopsy findings are not regularly published, as they are confidential. That means the media portrayal lives on – and that death counts as a COVID casualty, he said.

The media have a “tendency” to “overreport” unrelated fatalities to COVID-19 if that deceased person tested positive at some point in time, even if local coroners say the cause of death is something different after conducting autopsies, according to Bostom.

‘This thinking is no longer backed by science’

Mask-wearing and quarantine mandates across the globe are predicated on the “disproven idea that there is asymptomatic transmission of the virus,” which has been commonly accepted since the early days of the coronavirus lockdowns, Bostom said.

“This thinking is no longer backed by science,” he added, citing studies from China and Switzerland.

The first, which reported zero deaths credited to asymptomatic transmission, is less credible because it was commissioned by President Xi Jinping, according to Bostom. The Swiss study found “some asymptomatic” transmissions, totaling up to 35 out of thousands of participants.

The results of a large randomized clinical trial on mask efficacy by Danish researchers gave the most ammunition yet to skeptics of mask mandates, finding that mask-wearing does not protect the wearer.

Universities are still largely requiring students, faculty and staff to wear masks indoors, with some exceptions such as for faculty offices. Some also require masks outside, at least when physical distancing isn’t possible.

Syracuse, New York University, Harvard, the University of Georgia system, Tulane, American University and Texas Tech ignored Fix queries Nov. 20 and followup requests as to whether they would revise those mandates in light of the Danish study.

Pennsylvania State University, which has threatened to fine students for not wearing masks, initially told The Fix that local municipalities were in charge of such enforcement.

Ten days after The Fix asked to clarify that campus police were not issuing fines, Senior Director for Media Relations Lisa Powers sent an Oct. 7 press release on campus police enforcing the mandate as part of its Mask Up or Pack Up campaign.

MORE: ‘This is prison‘