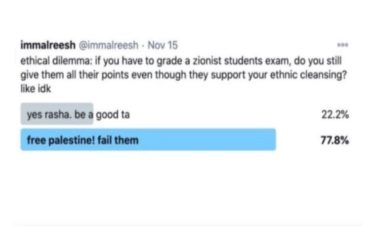 The Office of Institutional Equity has opened a probe into the TA, reports the campus student newspaper the Johns Hopkins News-Letter.

Johns Hopkins University’s media relations department provided The College Fix with a copy of a letter campus leadership sent to Hopkins Hillel to address the situation, which stated in part that “we are aware of an incident of alleged anti-Semitism and potential abuse of authority in the discharge of academic responsibilities on our campus, and while we are constrained in what we can share with you and others about matters such as these, we wish to assure you that we take seriously any and all allegations of discrimination, harassment, or other misconduct – including anti-Semitism.”

“Any link between grading and bias runs counter to our values and policies, and we are taking all necessary steps to ensure that does not occur,” it added. “[P]lease be assured that when [the Office of Institutional Equity] becomes aware of concerns in this area, assessment and prompt follow up begins, and appropriate action results.”

The News-Letter reports that the teaching assistant, Rasha Anayah, has been a TA for Applied Chemical Equilibrium and Reactivity for two years and last fall served as head TA for the course. Anaya did not respond to a request for comment from The College Fix.

Anayah’s Twitter feed has been taken down, but screenshots of the tweets have been preserved.

One was a Twitter poll from November which stated: “ethical dilemma: if you have to grade a zionist students exam, do you still give them all their points even though they support your ethnic cleansing? like idk.” The two answer choices given where: “yes rasha. be a good ta” or “free palestine! fail them.”

Fox News Baltimore reports that “five days after the poll was posted, the teaching assistant tweeted further controversial commentary about students expressing pro-Israel sentiments. The tweets also mentioned several of the students’ races, and took aim at one specific Jewish student who had taken a Birthright trip to Israel.”

Alanna Margulies, president of the Hopkins Hillel student board, told the News-Letter that there are concerns about the tweets, calling it “a situation that has made a lot of students unsafe.”

The News-Letter also reports that Anayah is treasurer of the pro-Palestine activist organization Students for Justice in Palestine, which told the student newspaper that they condemn racism but called on administrators to “acknowledge the difference between anti-Zionism and anti-Semitism as they conduct their investigation.”

A TA at an elite US university threatened to fail Jewish and pro-Israel students due to her anti-Semitic agenda.

Join us, @BZDIsrael and over 1,000 others who have signed a petition demanding @JohnsHopkins hold the TA accountable for this act of hate- https://t.co/2GqWphoDzP pic.twitter.com/L1yclvOUpp

Meanwhile, a prominent anti-Semitism group has condemned the situation.

In a December letter, the pro-Israel organization Stand With Us stated the tweets were “clear expressions of intent by a teaching assistant to punish students on the basis of their race, their Jewish identity, or their national origin as Israelis—all protected categories under state and federal non-discrimination laws.”

The letter then cites Johns Hopkins’ own discrimination policy, explaining how these actions are in violation of the policy.

Not all were displeased with Anaya’s actions, however, as some are now coming to her side.

This teaching assistant's heart is in the right place and she should be rewarded for her efforts.

I'm going to try and send her a gift card to Macy's or JC Penney's, I encourage other people to do the same. pic.twitter.com/cPP5YCas6U

“This teaching assistant’s heart is in the right place and she should be rewarded for her efforts. I’m going to try and send her a gift card to Macy’s or JC Penney’s, I encourage other people to do the same,” said one Twitter user.