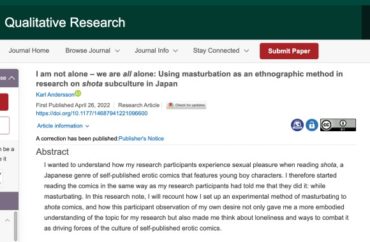 “We are continuing with our investigations and will consider closely all guidance from the Committee of Publication Ethics and ensure that any actions taken comply with COPE standards.”

The controversial paper was published in April and more recently prompted outrage, questions and criticisms. It was written by University of Manchester humanities graduate student Karl Andersson.

Andersson’s research is funded by the University of Manchester, according to his Twitter profile, in which he describes himself as “PhD student at + funded by @UoMSALC.”

However, the article includes a disclaimer stating that “the author(s) received no financial support for the research, authorship, and/or publication of this article.”

Andersson’s “4,000-word essay was published in April, and since then, horrified social media users have found it and shared it on Mumsnet, where it has been dubbed a ‘PhD in w*nking,'” The Guardian reported this week.

ResearchProfessional News reported August 10 that several “academics and public figures have strongly criticised the study and the procedures that allowed it to be conducted and published in a peer-reviewed journal.”

“The non-Stem side of higher education is just much too big, producing too much that is not socially useful.”

The non-STEM side of higher education is just much too big, producing too much that is not socially useful.https://t.co/MPCGU4slLE pic.twitter.com/ctJQYyoa5p

Andersson defended the social value of his research

In his acknowledgements, Andersson thanked his PhD supervisor, Sharon Kinsella, “for always encouraging me to go where my research takes me.”

MORE: These students wanted their school to ban pornography from its wireless networks. The school did it.