Meredith O’Brien is a journalism professor at Northeastern University, and go figure: She’s uncertain about how to teach her subject in the age of Trump.

In a recent column at Inside Higher Ed, O’Brien, “a former newspaper and investigative reporter, award-winning columnist, and blogger,” complains

[…] there’s an unusual question my students have been asking with increasing frequency over the past two years: “Is this normal?”

The “this” refers to the interaction between President Donald Trump and the news media. Typically, I am someone who tries to keep her political opinions under wraps when standing in front of a classroom. But I answer this loaded question quickly.

Ah, yes, of course: The professor is someone “who tries to keep her political opinions under wraps” … except in “emergency” cases like now.

After all, the professor says, “the Clinton impeachment hearings, the Sept. 11 attacks, the Iraq War, the aftermath of Hurricane Katrina, Edward Snowden’s leaks, police shootings of unarmed African Americans that spawned the Black Lives Matter movement, mass shootings and the images of Syrian refugees washing up along the shores of the Mediterranean” … all pale in comparison to covering the day-to-day happenings of the Trump administration.

If this nonsense isn’t enough for you, check out the prof’s own blog, especially the current leading post: “A nation’s core values under attack, from within”:

Right now, I am grieving for the United States.

For thoughtful statesmanship and diplomacy, which are no longer important to our commander-in-chief.

For common decency in the public square, which is largely absent and is rapidly disappearing altogether, everywhere.

For the common values of kindness that parents teach their children, as our nation’s leaders have been role-modeling cruelty and avarice.

For the importance of acting in an ethical manner, even when it goes against one’s personal interests.

For the respect our leaders used to show for the virtues of freedom and democracy, especially as our president embraces dictators and tyrants, and considers laws beneath him.

Either the bubble in which Professor O’Brien exists is very well-insulated, or this is a case study in self-deception.

Respect for “freedom and democracy”? Has the professor not been paying attention to current events? What about the freedom of the people to elect the leader of their choice, based on the democratic principles of government we (still) currently enjoy? This, despite the media always taking one side? For two years the administration has been tarred by a manufactured scandal, and now that it’s reached its conclusion … well, the other political party won’t allow it. 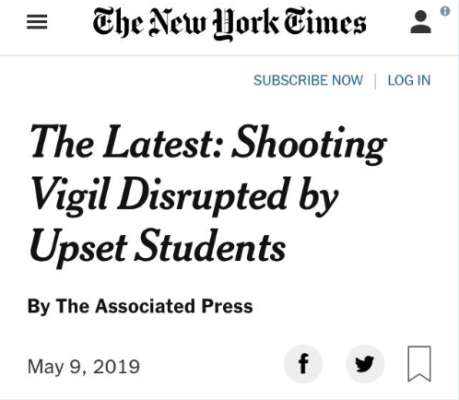 Or, more succinctly, in the words of Texas Democratic US Representative Al Green, “If we don’t impeach this president, he will get re-elected.”

The mainstream media trying to tear asunder the Trump administration is nothing new. Their constant “COLLUSION!!!” yammering to their mocking of the president for his (accurate) claims of being spied on are just the social media-age equivalent of their usual disdain for all things Republican and/or conservative.

A short two-minute video for those of you in the media pitifully insisting that no media reckoning is needed and journalists performed beautifully, soberly and responsibly throughout this whole saga: pic.twitter.com/PF5s2kTcYA

I’m old enough to remember Ted Koppel and crew openly making fun of Ronald Reagan on a “special” edition of “Nightline” regarding the president’s Strategic Defense Initiative (aka “Star Wars” program). And Dan Rather berating George HW Bush live on the air about Iran-Contra when they were supposed to be talking about 1988 campaign issues. And Rather pushing what proved to be a fake document about Bush’s son George W. prior to the 2004 election (which sidelined, but not ended, the journalist’s career). Etcetera.

I say all this as a very minor supporter of Mr. Trump. I am no fan of his arrogance and brash demeanor … except when it comes to the media. It is rightfully deserved. Like the Fox News Channel (at last! A news outlet that gives the conservative point of view a fair shake!) then-candidate-now-President Trump’s willingness to unabashedly battle back against media bias is something those on the right (and some in the center) have long desired.

MORE: How media bias and demand for racial narrative ruined one woman’s life

MORE: Media give Obama a pass for anti-black result of his Title IX policies