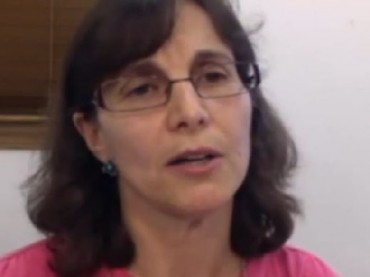 As a tenured lesbian professor at Syracuse University, Dr. Rosario Champagne Butterfield set out to study and ultimately expose the “Religious Right” as fanatical bigots, but a funny thing happened on her proverbial road to Damascus.

She accepted Jesus Christ into her heart, stopped having sex with women, and is now in the midst of telling her conversion story to the masses, including at colleges nationwide.

The story of Dr. Butterfield is chronicled in her book The Secret Thoughts of an Unlikely Convert: An English Professor’s Journey into Christian Faith. And as some might have guessed by now, she is no longer a tenured professor of English at Syracuse University.

“After her conversion to Christianity in 1999, she developed a ministry to college students,” her website states. “She has taught and ministered at Geneva College and is a full-time mother and pastor’s wife, part-time author, and occasional speaker.”

Undeterred, Butterfield continues into the fray, telling her life story with raw humility and gut-wrenching honesty. Some Christian students have said it’s one of the most powerful testimonies they’ve ever heard.

In a talk for the Family Research Council last summer, Butterfield launched into her autobiography by mentioning her Catholic upbringing, and said it wasn’t until college that her lesbian tendencies formed, that an “undercurrent of longing inserted itself in intense friendships with women.”

“In my late 20s, enhanced by feministic philosophy and lesbian and gay political advocacy, my homosocial preference morphed into homosexuality,” Butterfield said.

“That shift was subtle, not startling,” she said. “My lesbian identity and my love for my LGBT community developed in sync with my lesbian sexual practice.”

The scholar acknowledged that she felt lesbianism was her “true self,” that life “finally came together for me and made sense.” After graduating from Ohio State University, she settled in New York as an English professor at Syracuse University while living with her lesbian partner. They rescued dogs and volunteered for community causes together, and even attended a progressive church.

“My life as a lesbian seemed normal,” she said. “I considered it an enlightened, chosen path. Lesbianism felt like a cleaner and more moral choice, always preferring symmetry to asymmetry, I believed I had found my real sense.”

“As a professor of English in women’s studies, I cared about morality, justice, and compassion…I was fervent for the world views of Freud, Hegel, Marx and Darwin. I strove to stand with the disempowered.”

Butterfield said she led a happy and meaningful life, but in 1997 – spurred by her hatred of the Bible – she began researching the “Religious Right and their politics of hatred.”

She wrote an op-ed in the local newspaper that was read by many and prompted a variety of fan mail and hate mail. But one letter she received from a local Presbyterian pastor defied a category. It was polite, professional, challenging. Butterfield threw it away, then dug it out of the trash, perplexed by its request that she defend the presuppositions that had undergirded her op-ed.

She accepted his invitation, and became friends with the pastor and his wife.

“We talked openly about sexuality and politics,” Butterfield said. “They did not act as if such conversations were polluting them. They did not treat me like a blank slate.”

She added that they also did not share the gospel with her, nor invite her to church; just encouraged her to study the Bible, which is what she had set out to do as her quest to expose the Religious Right continued.

Slowly, the Bible took on new meaning to Butterfield. Her paradigms no longer stuck.

“What if it’s true, what if Jesus is real and risen, what if we are all in trouble?” she asked herself.

The friend lent Butterfield old Christian books, and one note scribbled in the margin of a particular book caught her eye: “Watch Romans I. This is where I will fall.”

… For although they knew God, they neither glorified him as God nor gave thanks to him, but their thinking became futile and their foolish hearts were darkened. Although they claimed to be wise, they became fools and exchanged the glory of the immortal God for images made to look like a mortal human being and birds and animals and reptiles.

Therefore God gave them over in the sinful desires of their hearts to sexual impurity for the degrading of their bodies with one another. They exchanged the truth about God for a lie, and worshiped and served created things rather than the Creator—who is forever praised. Amen.

Because of this, God gave them over to shameful lusts. Even their women exchanged natural sexual relations for unnatural ones. In the same way the men also abandoned natural relations with women and were inflamed with lust for one another. Men committed shameful acts with other men, and received in themselves the due penalty for their error.

Furthermore, just as they did not think it worthwhile to retain the knowledge of God, so God gave them over to a depraved mind, so that they do what ought not to be done. They have become filled with every kind of wickedness, evil, greed and depravity. They are full of envy, murder, strife, deceit and malice. They are gossips, slanderers, God-haters, insolent, arrogant and boastful; they invent ways of doing evil; they disobey their parents; they have no understanding, no fidelity, no love, no mercy. Although they know God’s righteous decree that those who do such things deserve death, they not only continue to do these very things but also approve of those who practice them.

Butterfield said this opened her eyes to some new truths.

Her efforts to keep away from the Bible after that moment did not prevail.

“As I read and re-read the Bible, I kept catching my wings in its daily embrace,” she said. “How could a smart cookie like me believe in these things? I didn’t even believe in truth! I was a postmodernist. … I believed the reader constructed the text, that text found power only in its reader.”

She said the Bible became supernatural to her.

And then, “one Sunday morning, two years after I first met (the pastor and his wife), I left the home of my lesbian partner and sat in the pew of the Syracuse Reformed Presbyterian Church.”

It was there she had a vision: “The image that crashed like waves of a raging sea was of me and everyone I love suffering in Hell. It vomited into my consciousness and gripped me … not primarily because we were gay, but because we were proud, we wanted to be autonomous.”

“It was our hearts first, our bodies followed. I got it. I heard it, finally. I counted the costs and I did not like the math. This was my crucible, and it is my crucible.”

From that point on, she prayed for “obedience before understanding,” and prayed to become a Godly woman, she said.

“I still felt like a lesbian, but what is my true identity, I wondered?” she said. “The Bible makes clear the difference between real and true. What is bigger, my lesbian identity… or God’s authority over me?”

“One ordinary day I came to Jesus,” she said. “We were singing from Psalm 119:56 … After I sang the words, something shifted. This Bible was not mine. I had scorned it, cursed it … but had been reading it and reading it.”

She said it was two years of laborious Bible reading, a process and a journey, to reach that final conclusion.

“My hands let go of the wheel of self invention,” she said. “It was a crushing revelation. It was Jesus I had been persecuting the whole time.”

“I was a broken mess,” she said. “I lost everything, but the dog. … Of course, there is only one thing to do when you need the living God – fall on your face and repent of your sins, a bittersweet experience.”

The speech Butterfield gave last summer at the Family Research Council marked about a decade of passing since her conversion. Today, she answers the question of Christianity and homosexuality in a loving, but firm, way.

“Why did I have to give up my girlfriend for Christ? Why couldn’t I have both? After all, can’t someone believe in Jesus, and be gay?”

“One: Can someone struggle with homoerotic attraction and be a faithful believer? Yes.”

“Two, but can someone unrepentantly embrace and deny as sin homoerotic lust, allowing it to flourish and root as a practice and an identity, and then add Jesus to this identity and then call this the Christian faith? No.”

“Why no? Why isn’t this no an example of homophobia? … I think we are all in the same boat. … There are millions of ways to be broken, and one way to be made whole. I think that clarifies things.”