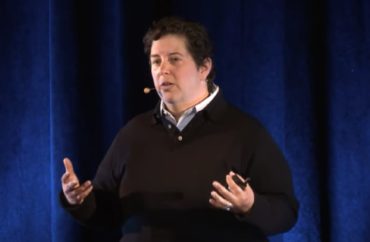 A lesbian school board member in Evanston, Illinois, a suburb north of Chicago, said she is a victim of a hate crime.

“This weekend I was the target of a hate crime,” Elisabeth “Biz” Lindsay-Ryan wrote in a statement released by the District 65 board of education on January 11. “The motive of the perpetrator was clear — my car and personal belongings ransacked along with a message of homophobic hate language prominently displayed.”

Ryan said the vandalism “is a result of white supremacy colluding with misogyny and homophobia to inflict the most harm possible.”

“Violent situations fueled by white supremacist rage and anxiety that might have felt far away, such as last week’s attack by insurrectionists of the US Capitol Building, continue to hit closer to home,” Ryan, who is vice-president of the board, wrote with Anya Tanyavutti, the board president.

Tanyavutti did not respond to two emailed requests for comment in the past two weeks. The College Fix asked if she had seen a copy of the police report prior to sending out the email and if she would provide a copy of the report.

Lindsay-Ryan did not respond to multiple requests for a copy of the police report and an update on the investigation.

On February 3, after publication of this article, The Fix received a response to a public records request. The Evanston Police Department closed the police investigation on January 20 according to the copy of the report provided by the police.

Fingerprints were recovered on the car, but police determine they were not sufficient for comparison to fingerprints left on a Christmas card. According to the police report, someone wrote “You faggot” on a Christmas card in Lindsay-Ryan’s car. A security camera recorded a car pulling up next to her car.

The public records response did not include photos of the Christmas card or a copy of the video footage. The Fix filed a subsequent request for this evidence today, after receiving the initial report.

Detective Corrie Svendsen closed the case and informed Lindsay-Ryan of this on or before January 20, according to the police report.

Alleged victim quiet on the investigation

Prior to receiving the police report, The Fix tried reaching Lindsay-Ryan for comment multiple times.

The school board vice president did not respond to multiple emailed requests for comment in the past two weeks sent to her District 65 email address and her DePaul University email address. The email sent to her DePaul address did not process due to a technical error. She formerly taught at the university but her current profile page is no longer listed.

The Fix called Ryan on February 1 and left a message on her voicemail at the phone number listed on her business website, seeking a copy of the police report and comment on any updates to the investigation. Lindsay-Ryan has a consulting business as a “equity, diversity, and inclusion facilitator.”

Ryan also did not respond to a subsequent email on February 1 reiterating the request, sent to her listed business email address and her school board email address.

The Fix also sent a Facebook message on February 1 to her business page seeking the same information, but did not receive a response.

Messinger told The Fix she would share the request for police records with a public records coordinator.

Police department refuses to provide a copy of the police report

The Evanston Police Department refused to provide a copy of the police report when first asked. The Fix asked the police department if there was currently any evidence to support Lindsay-Ryan’s claims about the crime being an example of homophobia, white supremacy and misogyny.

“Due to confidentiality and privacy concerns, I am unable to share any information with you regarding your inquiry,” Aretha Barnes, a deputy chief in charge of records, told The Fix in an email on January 19.

“[U]fortunately I can’t provide you with a copy of the report, you can FOIA it however,” Brian Henry, a commander with the police department, told The Fix in a January 20 email. “The case is still open, I have no further comment.” FOIA is in reference to the Freedom of Information Act which establishes public records law.

Henry did not respond to a follow-up email asking for an explanation on why he could not provide The Fix with the report if it was available under public records laws anyways. The Fix also asked if Henry could provide any details on what the report said.

The Fix filed a public records request with the city of Evanston on January 20, the same date the police closed the case. On January 27, the city’s public record database sent an email to The Fix extending the search deadline to February 3.

The automated email said “requested records have not been located and additional efforts are being made to locate them.”

Jody Wright, a deputy chief police officer in charge of the investigation division, did not respond to an emailed request for comment on January 18 seeking further information on the investigation and a copy of the police report.

Editor’s note: The article has been updated on February 3 to reflect the receipt of the Evanston Police Department police report and investigation update.