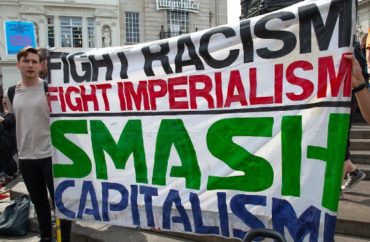 Stanford’s law school, despite “all the liberal faculty,” is guilty of “upholding the patriarchal racial colonial capitalism.”

That is the assertion of the Stanford chapter of the National Lawyers’ Guild, a liberal legal advocacy group. The SLS National Lawyers Guild released a 32-page “Letter to Incoming Progressive/ Radical Students” ahead of the fall semester.

It is similar in design and language to other “dis-orientation guides,” such as one released last year at the University of Chicago.

The liberal law student group seeks “to bring together law students dedicated to harnessing the law as a tool to advance social justice and social movements.”

The group professes that one of the top law schools in the country is made up of “problematic ideologies,” listing as an example an “obsession and focus on ‘national security’ to serve xenophobic interests.”

The College Fix could not initially locate direct contact information for the group. Associate Director of Students Affairs Holly Parrish said she would forward questions to the group, but NLG did not respond.

The Fix found email addresses for members and emailed Mohit Mookim, Jacob Maddox and Leanna Lupin on September 24 to ask for comment and to see how students and administrators had responded.

The university’s media relations team has not responded to a request for comment on the assertions made in the guide either. The College Fix first contacted the private California university law school media team a month ago.

Abolish Stanford, a group recommended by the Stanford NLG as another activist group to get involved with, did not respond to a request for comment either.

The Stanford College Republicans told The College Fix email that “the left is becoming increasingly emboldened both at the law school and undergraduate population,” and this is one example. A separate Facebook post said that the guide is an example of “the type of lunacy Critical Race Theory can spawn.”

Stephen Sills, president of the College Republicans chapter, said that some leftist groups have diminished in influence as his group has become more prominent.

“We have had no direct interaction with the NLG, however the leftists both law school and undergraduate population likely share an overlap in membership,” Sills told The Fix. “The NLG guide strongly resembles, for example (and cites), a similar guide written by the Stanford Affiliated Students for the Liberation of All People (SLAP), whose agitators we have had experience with in the past.”

“Their presence on campus has become significantly fragmented since our organization has risen to prominence,” Sills said.

The guide provides other resources for aspiring liberal lawyers, including a number of videos. Topics include “The legal roots of resistance” and “Legal Structures for Economic Transformation.”