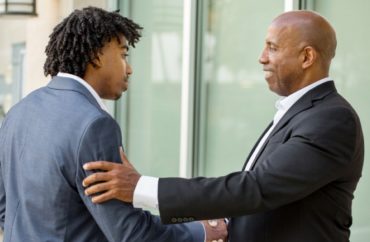 Loyola University Maryland’s business school removed a video that proposed a project to match black entrepreneurs in Baltimore with black students to provide them with mentoring on business skills and financial literacy.

The video quotes from slavery abolitionist Frederick Douglass and former President Barack Obama to make the case for the mentorship program that focuses on the “black youth of Baltimore.” Students talk about the program while walking through decrepit streets and housing.

The video (below) has been removed by university officials, but someone reuploaded the video and The Fix uploaded it as well to preserve it in case that version is removed.

The program, to be called “Baltimore’s financial fathers” would have worked with the “Baltimore business community” to match black business owners with black youth to become “agents of change.”

However, the university removed the video after complaints from the student government association and an activist group called “Addressing the System.”

University officials are thankful for community members for “calling us into deeper conversations about institutionalized racism on campus,” Kathleen Getz, the business school dean wrote in an email, a portion of which the Foundation for Individual Rights in Education obtained.

Getz also said that “Black lives matter, and we must demonstrate that through our actions.”

Getz said the university planned to find “opportunities” for the community to “participate in a practice of restorative justice.”

The response came after complaints from some student leaders and activists.

“This is disrespectful on so many levels and is Racist [sic] !!” the student group wrote on Instagram on March 22 along with a screenshot of one student participant walking through crippled buildings while wearing a suit.

“The video promotes the ideology of white saviorsim [sic], white supremacy and most of all a lack of addressing structural racism!” the page said.

“Countless times Loyola has pushed racial issues to the side. And deemed them self’s [sic] as separate from the Baltimore community !!” the activist group said.

The student government, which co-sponsored the annual business promotion event, criticized the video as well.

“[W]e do not condone the racially insensitive messages displayed in the video,” the group posted on social media, in a post archived by FIRE. It appears to be from an Instagram story, which deletes after 24 hours. The post is not visible on its Instagram page.

“As a once-proud Loyola University alum, I am ashamed that my alma mater has succumbed to this kind of pressure,” Giovanni Gravano, a staffer for the free-speech group, wrote in the blog post covering the story.

“Where strong university values once guided Loyola and its initiatives, it seems those have been replaced by submission to politically motivated demands from social media,” Gravano said.

The free-speech group said it is monitoring the situation.