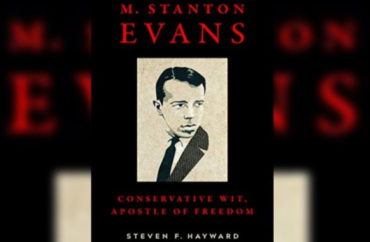 As a young intellectual writer, Steven Hayward benefited from the wisdom and leadership of M. Stanton Evans. Today, as his biographer, he remembers a man who helped pave the way for a generation of young journalists.

Evans founded the National Journalism Center in Washington D.C. in 1977, and the list of alumni who gained experience through its doors in the decades since is long and distinguished.

The book calls the National Journalism Center “one of the key components in creating the thriving conservative media ecosystem we have today. More than 1,500 young aspiring journalists passed through the NJC program before Stan handed it off to Young America’s Foundation in 2002.”

Hayward’s biography of Evans, published last month, includes stories of his days as a dogged newsman at the Indianapolis News and his adventures during the Reagan Revolution.

It recounts his accomplishments as a leader who helped shape the conservative movement, including his authorship of the Sharon Statement in 1960, a founding document of modern conservatism used to launch Young Americans for Freedom. In sum, Evans served as an activist and journalist leading the American conservative movement for decades.

But that Evans was a mentor to an entire generation of conservative writers and journalists is a legacy that continues to pay dividends even after his death in 2015 at the age of 80.

The National Journalism Center served as a training ground for conservative journalists. He taught budding reporters what was important, and how to do good journalism, Hayward said.

Evans understood media bias as “not simply being a matter of ideology but a matter of groupthink, laziness and superficiality — not digging for the facts, but following the herd mentality,” Hayward said.

In contrast, he added, Evans taught young journalists how to understand that “contrary points of view are a promising avenue to be discovered.”

The book notes of Evans: “What made his journalism distinctive was his disposition to ask counterintuitive questions, to entertain the contrarian perspective, to probe for inconsistencies and telling hypocrisies, and above all not to accept liberal orthodoxy no matter how unanimously propounded by the high and mighty.”

When it came to higher education, Evans knew what was at stake

“His very first book was called ‘Revolt on the Campus,’” Hayward told The Fix, pointing out that Evans always understood the need to have “nodes of resistance” to liberalism on both campus and in journalism.

“He gave a ton of talks on college campuses over the years and did the best he could to help conservative college students survive and thrive,” Hayward said.

Evans, who taught journalism at Troy University for decades, was also a member of The College Fix’s Student Free Press Association board of mentors.

“When I founded the Student Free Press Association, Stan Evans was one of the first people I contacted for help and advice – and he was delighted to give it,” said John J. Miller, executive director of the association. “I’m grateful for his generosity as well as his commitment to excellence in journalism and the mentoring of young people.”