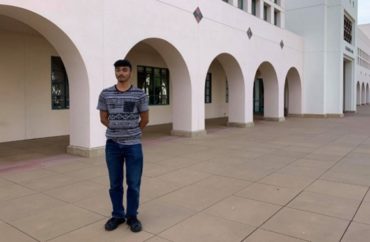 Jermelle MacLeod is a man, and he’s not going to apologize for it.

The San Diego State University freshman and budding philosopher recently took to the pages of the campus newspaper The Daily Aztec and let the world know what he thinks of the term “toxic masculinity” and those who wield it.

“Toxic masculinity doesn’t exist,” he wrote in his op-ed. “Traits that one person considers toxic, may not be to another person; the entire phrase is based on a subjective scale with absolutely no objective ground and is used as a shaming tactic for ‘modern feminists’ and anybody else buying into their horrible rhetoric.”

“For example, one person may like the typical ‘alpha male,’” MacLeod wrote. “Confident, loud, powerful, buff, etc. But another person may find those traits unlikeable, and so they’ll brand that male as ‘toxic’ because ‘toxic masculinity’ is a catch-all term for any traits a man has that are considered unlikeable or ‘overly masculine.’”

“ … The problem is, by shaming men on a completely subjective scale, you intimidate, which is exactly what the left and most ‘feminists’ want, they want to intimidate the men that go against the grain and reject the weak and feminized version of men you see portrayed everywhere. I believe there are toxic people, but to make an entire term for men and to keep cramming it down the throats of men is biased, bigoted and a result of brainwashing.”

“A toxic person can be defined as somebody that is poisonous to you or society. Toxic people can be any gender, male, female or nonbinary. So why do we have an entire term for men?”

MacLoad, in an interview this week with The College Fix, said he has no regrets about taking on controversial topic.

MacLeod is no stranger to writing — nor taking on the subject of men.

His byline discussing male behavior and characteristics has been featured on The Good Men Project website with headlines such as “Free Will: How Men Can Steer Clear of Society’s Outdated Expectations” and “Lessons From a Man on the Road: How can a man live life without worrying about what someone else thinks of him?” His musings are also published on Medium.

As for his decision to broach toxic masculinity in the pages of The Daily Aztec, it was a “buildup of things,” he told The Fix.

MacLeod was referring to a decision earlier this year by the American Psychological Association to offer guidelines calling “traditional masculinity” harmful.

“And most importantly,” he added, “it was the fact that any man who goes against the grain is shamed for doing so, so they lose their sense of individuality and they’re forced to succumb to the nonsense that the left is putting out.”

MacLeod will not be shamed, even in the face of backlash, he said. His column prompted an angry letter to the editor and more.

“There was obviously that whole letter to the editor, which was a response, then there were a lot of nasty messages on Twitter and Facebook,” he said.

MacLeod said people called him negative names and one compared him to Vice President Mike Pence. Another wrote that his work would be in a manifesto for a school shooter.

But on the flip side, “there was actually more positives than negatives,” he said.

A lot of people told him, “Finally, somebody said it,” he said.

“A lot of kids were surprised that somebody [was willing to actually say it]. I found out that mostly, even if they didn’t like what I said, they still liked that I said it anyway.”

Asked why he thinks masculinity is under attack, he said it’s an attack on individualism.

“Masculinity is the application of four traits. Courage, mastery, honor and strength,” MacLeod said. “It’s under attack because all those things are inherently individualistic, and they go against a lot of what is being preached nowadays, which is fearfulness, sensitiveness, timidity, and it’s the exact opposite of what’s being pushed right now.”

And he’s pushing back — even in class.

“The teachers usually just nod in silence, the students kind of raise their eyebrows and look at me weird,” he said.

At the end of the day, it’s a broken narrative.

“So everything just stems from this misunderstanding of what makes a man and what masculinity is.”